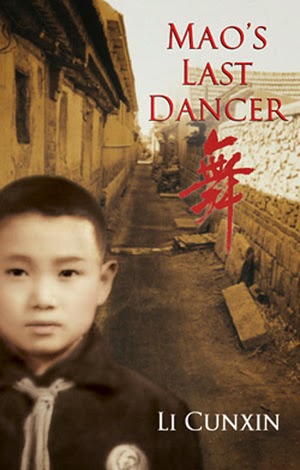 I don't read too many memoirs, so when this one was chosen for our book club pick I hoped it would be good. Well, it was more than good, as I now consider it one of the best memoirs I have read.

This book is the autobiography of one of China's greatest ballet dancers. But what made it stand out for me, right from the first page, I might add, was that Li recounts his childhood in China in the 60s during Mao's communist reign. Li and his family of six brothers were desperately poor peasants. I found this part of the book the most interesting. Every time I put the book down I couldn't wait to get back to it. Knowing this was a true story made me experience so many emotions.

Li brought his childhood to life with his lively portrayal of poor life in the commune. He did it with humour and compassion. I felt like I was right there in China, my stomach growling in hunger along with Li or my feet aching to run with the children as they played in the fields.

At the age of eleven, Li was chosen by Mao's cultural delegates to leave his village and study ballet in Beijing. He now felt the aching loss of a close-knit family and community and the pressure to do well as this would reflect well on his family. With much emotion and vivid details, Li recounts these years of perfecting an art he knew nothing about before and rising to success among his peers. This enabled him to be chosen to go on a short trip to America where he learned about Western culture and its ways, so different from his own rigid and sheltered life. This taste of freedom led him to eventually defect from China and perform all over the world.

A movie adaptation of the book is available and I would now like to see it. Just watching the trailer brought tears to my eyes. Li currently lives in Australian with his wife and three children. In 2012, Li was appointed the new Artistic Director of Queensland Ballet. You can learn more about him at www.licunxin.com.

Note: This book is rated C = clean read.
I will count this book toward the following challenges: Reading the World