Posted by Laura at Library of Clean Reads on May 16, 2014 in Canadian author Caroline Pignat Empress of Ireland Historical Fiction YA Book Reviews | Comments : 0 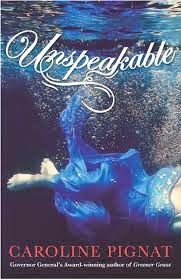 I was immediately attracted to the synopsis of this book, especially when I found it to be centered around the sinking of the Empress of Ireland, which suffered the same tragedy as the Titanic. What's more, the setting takes place between Liverpool and Quebec City, which I've visited many times and is situated but a couple of hours from where I live.

Ellen Hardy, heiress to Hardy Estate is innocently caught in a bad situation that costs her everything. She's finally sent to work as a stewardess on the Empress, a beautiful ship that rivals the Titanic, where she meets solitary fire stoker Jim Farrow. They form a friendship and bond as two souls deeply hurt and hiding shameful secrets. When the Empress is struck and most passengers die, Ellen survives but with the loss of Meg, her one true friend and Jim, the man she was beginning to love.

When an American journalist wants her story, she refuses, never wanting to relive that horrible night again. But she is persuaded when he shows her Jim's journal. Desperate to know if Jim may also have survived she agrees to tell her whole story and the journalist will pay her by giving her the journal, one page at a time.

This book reminded me of some elements of the Titanic movie, but it has its own story, of course. I love YA historical fiction and this one kept me turning the pages. The scenes of the sinking reminded me exactly of those described when the Titanic sank, and it was heart-wrenching to read about. I was surprised that I never knew about what is considered Canada's forgotten and worst Maritime disaster, which happened only two years after the Titanic.

Ellen is a great character. A young woman who is taken advantage of and mistreated because of her father and society's lack of compassion. She suffers great losses, but learns to become a survivor rather than a victim. Jim is a compelling character too. There are great messages in this book, not just for teens but for all of us. The ones that stood out are: learning to find inner strength; learning to forgive oneself; and learning to move on without living in the past.

I love reading books set in Canada and revolving around some Canadian historic event. This book has a good plot, great characters and a compelling setting. I thoroughly enjoyed this story and look forward to reading more works from this author.

Note: This book is rated P = profanity, for religious expletives.

Disclosure: Thanks to Vikki Vansickle from Penguin Canada for sending me this book for review. I was not compensated in any other way, nor told how to rate or review this product.