The Splendour Falls by Susanna Kearsley 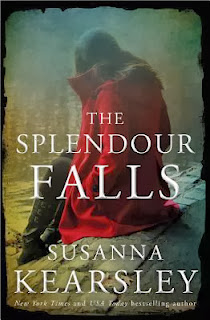 
I’ve read several books by Susanna Kearsley and have fallen in love with her style of writing. Her settings are evocative and her characters different. The Splendour Falls is another good one that I enjoyed, but it’s not my favorite by her.

Emily’s cousin, Harry, a PhD history professor, invites her to join him in the medieval town of Chinon, France, where he is going to do some research. When she arrives there he is nowhere to be found, which is not that unusual, because he often forgets about others when he is deeply involved in something. Emily meets and becomes friends with a group of tourists from her hotel. She also meets some of the townsfolk, including the wealthy owner of Clos des Cloches, a vineyard on the cliffs next to the famous remains of the brooding castle, once owned by King John.

Emily soon realizes that things are not always what they seem, and that several harbour dark secrets. Legend says that during the 13th century siege of the castle, Queen Isabelle hid a “treasure of great price”. And another legend says that another Isabelle who lived in Chinon during the German occupation of WWII, fell in love with an enemy soldier and things became tragic. All these things are interconnected with the folks she meets, and soon Emily is trying to solve a mystery that has become deadly.

In essence, The Splendour Falls is a mystery novel. Kearsley, of course, blends in some romance, legend of an ancient castle, and a crew of diverse and sometimes mysterious characters. Emily is still mourning the loss of her parents’ marriage when they divorced and this has made her cynical of lasting love. Sometimes I found her to be bland, even though the story is written from her point-of-view. I felt I didn’t know enough about her.

Kearsley develops an intricate plot and includes scenes that may have seemed superfluous but had a lot of meaning and hidden clues that all comes together in the end. The character I liked the most was Paul who became a good friend to Emily. Her romance with an enigmatic man which I shall not name was based on too little and wasn’t convincing enough. It was mutual attraction, and they barely spoke. In addition, the whole story takes place within a week.

So although I enjoyed this one, I think I was expecting more because of having read other books by Kearsley that I just couldn’t put down. If you are a Kearsley fan, you may or may not be disappointed depending on what you’re looking for. Kearlsey includes all her trademark elements: an atmospheric setting, mystery, intrigue, secrets and legends. But for me, they still could not fully make up for a story that I thought was good but not fantastic.

Note: This book is rated P = Profanity for a few religious expletives.