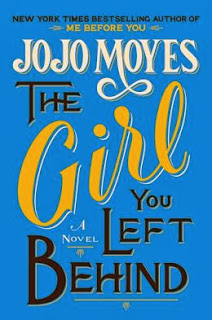 Jojo Moyes left such an impression on me with her book Me Before You that I wondered if she could do the same with this novel. I needn’t have worried. Once again I was reading constantly because nothing could pry this book out of my hands. I loved this book!

This novel is essentially two stories that come together in ways unexpected. The first part of the book takes place in 1916 France, during WWI, when Sophie Lefèvre, a young wife whose husband is off fighting in the war, goes back to the little town of St. Péronne where her family owns a hotel. She returns to help her sister Hélène, Hélène's young children and their teen brother Aurélien. As the effects of war and the invasion of the Germans ravage the town, they work hard to survive on little food. When a German Kommandant decides to use their hotel home as a place for him and his soldiers to take their meals, things begin to unravel. The Kommandant becomes obsessed with a portrait painting of Sophie that was done by her husband, the artist Édouard Lefèvre.

Fast forward to London 2006 and we meet Liv Halston, a young widow still grieving. Of comfort to her is a painting bought and given to her by her late husband during their honeymoon. It is Sophie’s portrait. Soon Liv meets Paul McCafferty and he reawakens a part of her she thought lost forever. The problem arises when Paul, who recovers lost and stolen paintings for a living, discovers Liv has the very painting Édouard Lefèvre’s family is searching. As the history of Sophie’s painting is brought to life, the question stands as to whom it really belongs, especially now that it’s worth millions.

Both Sophie and Liv, separated by a century, risk all they have for a cause they believe in. And although we think we know where the stories lead, Moyes has us wondering constantly as she takes us for an emotional rollercoaster ride through the lives of these women.

For me Moyes' talent really shines in this novel because she was able to change her writing style so that the historical fiction part read like one and the contemporary fiction like a modern one. The setting, the dialogue, the characters were so well suited to their era that it took some adjustment when I began to read part two. Moyes easily transported me to a little French town in 1916, with its tight but despairing community. I loved Sophie’s gripping story and the historical part so much, but as I got to know Liv in the modern world, she grew on me too.

There’s no question about it; Moyes is a talented writer who creates believable and unforgettable characters. She knows how to immerse us so fully into a story we don’t want to retreat. She’s a brilliant author and storyteller. I will count this novel as one of my best reads of 2013.

Note: This book is rated S = sexual content. There are two somewhat explicit sex scenes. Rated V = mild violence for brutal action toward citizens during war time. Language: There may also have been religious expletives.

Disclosure: I borrowed this book from the library and I also received a copy through NetGalley from the publishers. I was not compensated in any other way, nor told how to rate or review this product.