Sandra and I both read this one (we love time travel) and decided to write a double review of it. You will find Sandra's review followed by mine. We both agreed this was a fun read! 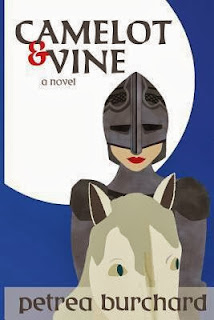 Forty-year-old Casey Clemens has lost her boyfriend and her acting job on the same day. Wanting to escape her life, she hops a plane to England. While sightseeing in rural Wiltshire she decides to rent a horse called Lucy, who upon being startled by the bright headlights of a car during a rainstorm, skids on the slick pavement throwing Casey into 6th-century Arthurian England...along with Lucy. Who knew that horses can time travel?

Casey is soon smitten by middle-aged King Arthur, at odds with Lancelot and befriended by Guinevere. Everyone believes her to be a wizard who has come to save Arthur. Can Merlin help her return to the future?

This is a funny, interesting twist on the traditional King Arthur stories of swords, battles, love triangles, Camelot and Knights of the Round Table. It’s curious to contemplate Arthur as scholar. Casey relates, “what I didn’t expect were the stacks and stacks of vellum sheets, bolted between slabs of wood, piled on the desk and floor. Books. Everywhere. But with shoulders hunched and shirt draping open, King Arthur wore the look not of a scholar, but of an aging prize-fighter.” We recognize all of the characters but they somehow seem different.

This is a light-hearted, easy read, well researched with descriptions of armor, long-haired men, smells of battle, chain metal, swords, and customs of the day. It sounds authentic. It’s a brilliant fresh take on the legend of Camelot. The ending is perfect.

Apart from a couple of expletives, it is a clean read and will appeal to fans of the Arthurian legends.

When I received this book for review it came with its own bookmark sporting the words, "Intelligent escapism for those days when you just need to live in another millennium." How true! For me, time travel books help me escape into the past, into another world.

Casey realizes she's not happy with her life, especially after she loses her job and her married boyfriend. On a whim, she boards a plane and heads to England. She needs time away to sort out her life full of lies and loneliness. She ends up in a small town where King Arthur, her childhood hero, once fought his battles with the Saxons in the 6th century. What a surprise then when she falls through a gap in time and ends up saving King Arthur during one of his battles.

From that moment on Casey is on an adventure that tests her loyalty, self-confidence and courage. Her time in the Dark Ages makes her realize that if she wants a better life, it's really up to her. She can start over even at the age of forty.

Burchard brings us a tale of King Arthur that is a little different from the Hollywood versions. Her descriptions of life in the 6th century are not romanticized but came across as very realistic, from the lack of washing to the crude behaviour of the men. We saw things through Casey's eyes, which was enlightening both because of the differences between centuries and also because she liked her life in King Arthur's court.

I was constantly surprised by this book. It was not predictable and kept me wondering how it would all end. Even though it was a light read, I appreciated the changes that took place in Casey. I initially thought her too weak, but as the story progressed I came to see that she just needed to come to terms with her past and realize her true self was not incapable of true friendship and honesty. She was a good flawed character and I loved the ending. It was perfect and satisfying.

This was a fun book to escape with. I recommend it to fans of time travel and medieval tales.


Disclosure: Thanks to Petrea Burchard for sending us this book for review. We were not compensated in any other way, nor told how to rate or review this product.