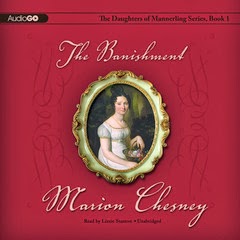 
This is the first book in The Sisters of Mannerling series. I believe there are six books. The author is Marion Chesney who is actually M.C. Beaton whose books and audiobooks I have seen plenty of times but never read or listened to.

The Banishment is a Regency romance. Beautiful Isabella Beverley, the eldest of five equally beautiful sisters live with their wealthy and haughty family at Mannerling, an opulent mansion. But soon they are all in for a shock when Mr. Beverley gambles away the estate and all its contents. The girls who've lived a lavish life and only ever been served hand and foot are now reduced to a modest country home. Snobbish Mrs. Beverley and her daughters cannot reconcile themselves and feel it is Isabella's duty to try to marry Mr. Judd, the man who won Mannerling. They are obsessed with getting Mannerling back. But Isabella learns some humility and becomes attracted to the Irish Lord Fitzpatrick.

This was a fun and delightful book to listen to. I enjoyed following Isabella's journey from haughty self-absorption to a woman who learned that brick and mortar cannot make up for love. I liked Lord Fitzpatrick's honest character who treated Isabella like an equal even as he recognized her naiveté. When society shunned the Beverleys he and his aunt were kind to them even when Mrs. Beverley did nothing to deserve it. The plot is simple but good.

The book is narrated by Lizzie Stanton who does a good job although at times I found her voice a little monotone. I like British voices and this was a pleasurable way to pass the time when driving to work. I'm looking forward to the second book in this series.