Daughter of the God-King by Anne Cleeland 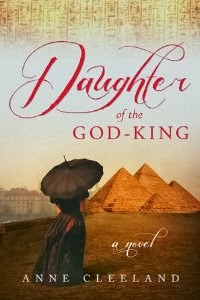 
Hattie Blackhouse is a young woman who lives in Cornwall while her famous archaeologist parents are in Egypt most of the time exploring newly discovered tombs. She decides she's had enough of her monotonous life in Cornwall and travels to Paris, to her parents' townhouse in search of her childhood friend Robbie. Once there, she discovers that her parents have disappeared, and that her own life may be in danger. Something is afoot and Hattie wants to find out. She embarks on a trip to Egypt where her introduction to espionage, adventure and romance begin.

Author Anne Cleeland knows how to mix witty dialogue, strong characters, an espionage plot and romance together. Hattie Blackhouse may be small in stature, but she is intelligent and feisty. I like that she was also naive and vulnerable at times as it made her more real. Berry, the spy who is somehow embroiled in her parents' disappearance kept me guessing whose side he was on. I liked Miss Bing, Hattie's companion who was extremely knowledgeable, astute and could deal with shocking situations with a poker face. She was a great secondary character.

The story takes place during the Napoleonic era just after the emperor was exiled and this adds to the intrigue. Most of the novel takes place in Egypt and I learned a few things about its history, the British craze to own artifacts excavated from the Valley of the Kings, and how war can make traitors out of anyone. There are some heavy themes in this novel, but the author keeps them light and the romance overshadows them. Hattie, who's led a sheltered and uneventful life, seems to deal with certain situations a little too well, and sometimes with little emotion, like when a man is killed in front of her and there is no mention of how this made her feel.

So although light and fluffy, what I like the most about Cleeland's novels is that the writing style and language is clever and has the feel of being written two centuries ago. No modern idioms. If you like historical romance set in an exotic place with espionage, intrigue and adventure then this one is sure to please.

Note: This book is rated S= sexual content and V = violence (mild). There are two sex scenes, one of which is explicit. There is one scene with killing.