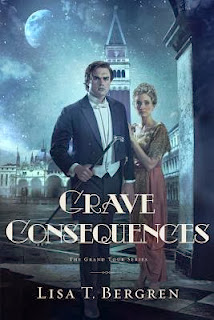 Grave Consequences is the second book in the Grand Tour Series. It continues where the first book Glamorous Illusions left off. (read my review) In a nutshell, Cora Kensington is the illegitimate daughter of a wealthy man who comes to claim her and offers to take care of her parents who are struggling with health issues and a failing farm. Cora joins her half-sisters and brothers on a Grand Tour, and is exposed to the life of the wealthy and prominent.

In the first book, Cora catches the eye of wealthy Frenchman, Pierre de Richelieu in France. She has budding feelings for both him and William, the tour guide, which is further explored in this novel. The Kensington family continue their Grand Tour through Europe. I loved visiting the places along with them. Another character joins them on this tour and he is friendly but mysterious. Cora learns first-hand how dangerous it can be to be well-known and very wealthy.

As in the first book, the story alternates between Cora and William's point of view, with Cora's written in first-person, whereas William's is in third-person. This second book explores more of Cora's romantic feelings, her indecision about the two men vying for her affection, and how everything has changed for her since she was claimed a Kensington. She no longer has the freedom to do as she pleases and she does miss her former life.

In the first book, there is much animosity between Cora and her half-sisters but there isn't much of it in this book. It just kind of stopped, which I thought was a little unrealistic. Again, I thought Cora, having been brought up a farm girl, adapted a little too well to the life of the rich and famous. I found this to be a long book, and I would have been happy with less unnecessary details that sometimes bogged down the story.

Grave Consequences is not a stand-alone novel. You would need to read the first book to understand the story and dynamics between the characters. Although I enjoyed this second book, it wasn't as exciting as the first. I'm currently reading the third book in this installment and it promises to be good. It also takes place in Italy. I'm eager to see how Cora's story will end.

Disclosure: I obtained a copy thanks to NetGalley. I was not compensated in any other way, nor told how to rate or review this product.