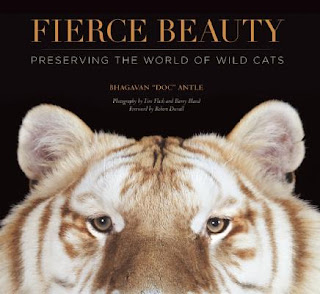 
This is a stunning volume about the conservation of wildlife –specifically tigers and other wildcats. The photography is breathtaking, showing the cats in close-ups and in all their beauty. My son really loved the photos, especially the adorable puppy tigers!

I don't know much about wildlife so this book was eye-opening. Bhagavan “Doc” Antle is the founder of TIGERS (The Institute for Greatly Endangered and Rare Species). In 1980, Antle created a travelling show so that humans can have a direct face-to-face contact with these beautiful cats. When Hollywood discovered this, Antle was called to provide animals for movies. He agreed and subsequently used the money to purchase land and build a home for these animals. This home is not your typical zoo. It allows for the animals to roam free and protects them. Why? Because 97% of tigers have been killed since the beginning of the last century. They are killed for sport. There are only a few thousand tigers left in the whole world. What a sad statistic!

In the foreword of the book, Robert Duval states: “Ignore the plight of endangered animals and you turn your back on the future of humanity.” Now this may seem like a far-fetched statement, but the animal kingdom does affect our lives. But what's so special about big cats? According to this book, they are at the top of the proverbial food chain and their well-being safeguards the well-being of thousands of other species. We live in an interdependent world.

This book is made up mainly of photographs, but the text is enlightening. I learned about ligers, a hybrid animal which is the result of a male lion and female tiger. It is the biggest cat in the world, weighing 900 lbs! The white tiger too is stunning to look at. Those who have met these animals face-to-face have said that it has changed them. No doubt, it must be an amazing experience.

If we ever plan a trip to Myrtle Beach, South Carolina, we will definitely visit this 50-acre private preserve, home to over 60 big cats, and visit the animals there. My son and I would love to touch and get close to these beautiful and powerful creatures.

This is a beautiful book that would make an ideal gift to anyone who loves animals, especially big cats, and who cares about wildlife preservation. It would also be a great coffee table book because the photography alone is gorgeous. To learn more about TIGERS (The Institute for Greatly Endangered and Rare Species) please visit http://www.tigerfriends.com/home.html. 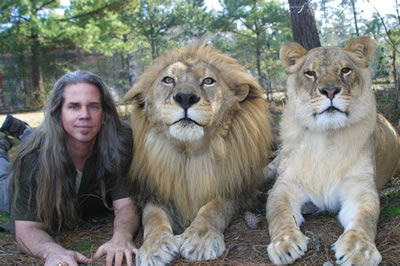 About the Author:
Dr. Bhagavan "Doc" Antle is the founder and director of T.I.G.E.R.S., The Institute of Greatly Endangered and Rare Species and the R.S.F., The Rare Species Fund. He grew up on a vast cattle ranch in Arizona, where his great love for wild and exotic animals began and from a very young age he began raising and caring for every amazing animal he could get his hands on. As a young man he had many great opportunities to travel and explore the world and this eventually brought him to China where he studied for and received his Doctoral degree in medicine. He then interned as a traveling Doctor throughout many villages in mainland China and other parts of Asia. He returned to the United States in the early 80's and located in Buckingham, Virginia, where he co-created and ran Integral Health Services; an alternative drugless therapy clinic utilizing meditation, diet and exercise programs.

In 1982, the clinic was visited by a zoo director who introduced Doc to a Siberian tiger cub. He was so amazed by the presence of the tiger that he asked if he might use it at the end of one of his lectures, to demonstrate how even the most powerful animals were greatly affected by their environment. The presentation was a great success and after it was over an impressed audience member introduced himself as the local head of Exxon Oil. He asked Doc if he would present the tiger and his message of the dangers of environmental damage at an upcoming Exxon Convention. Needless to say, they were blown away and an amazing partnership was born between Doc Antle and the big cats of the world. T.I.G.E.R.S. was soon created as a wildlife education organization, dedicated to promoting global conservation with informative, educational, and entertaining interactive programs. It's animal ambassadors are important living examples of current worldwide environmental issues, helping to educate the world about the importance of conservation and global biodiversity.

Today, Doc is widely recognized as one of the foremost animal trainers in the world, having worked with thousands of animals, and traveled the globe promoting the education and conservation of some of our planet's most rare and endangered species.

Disclosure: Thanks to Insight Editions for sending us the e-ARC of this book for review. We were not compensated in any other way, nor told how to rate or review this product.