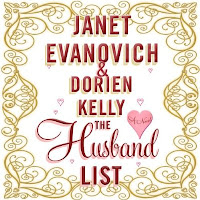 
American heiress Caroline Maxwell grew up playing with her brother Eddie and his friend Jack Culhane. But now that Caroline is twenty-one, her formidable mama has a husband list of eligible rich men she hopes will ask for her daughter's hand in marriage, setting her biggest hope on the English Lord Bremerton. But Caroline longs for Jack, even though he is considered an unacceptable suitor since he has no title even if he does have money.

This was a fun and fluffy historical fiction set in New York City in the late 1800s. I haven't read any of Janet Evanovich's popular contemporary novels, better known as the Stephanie Plum series. So this is the first time I read one of her books, co-authored.

Caroline was a strong female character with a mind of her own albeit having a dominating and sometimes foolish mother. Jack was the dashing dark hero, of course. Caroline took some sexual risks with Jack, which could have led to disaster, but all turns out well in the end. It's a simple and predictable story, but great if you want a break from the heavier dramas.

This is a feel-good book, a romantic tale that is pure escapism. I listened to the audiobook version with Lorelei King as narrator, who did a great job with all the accents. She made listening to this book fun and easy. I would definitely listen to her again.

Note: This book is rated S = sexual scenes of kissing and touching, no sex.

Disclosure: I borrowed this audiobook from the library. I was not told how to rate or review this product.