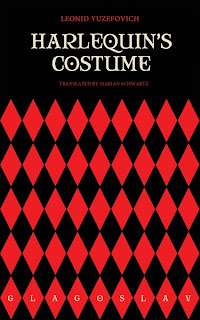 
Harlequin’s Costume is the first volume in a trilogy whose main character is based on the real-life Ivan Dmitrievich Putilin, the Tsar’s (of the infamous Romanov dynasty) Chief of Police in St. Petersburg, Russia from 1866-1892. This book recounts events surrounding the murder of a foreign nobleman in 1871 Russia and how Chief Inspector Putilin solves it. A murder with political implications is committed, three people confess, but who is the real murderer? That, in essence, is the storyline in this is historical fiction/Russian whodunit.

This excellent translation from the original Russian is seriously funny. Chief Inspector Putilin is a simple civil servant: “with luxuriant side whiskers, a man moderately honest, moderately clever, and moderately well educated.” “His whiskers demand constant care, but Ivan Dmitrievich was beyond the point where he could shave them off. His fat bare cheeks would have required different facial expressions and thus a different tone for his relations with superiors and inferiors.” One of the police officers says about the murder investigation: “With this kind of evidence we can prove anything we like.”

The author is also a historian, so the details that he includes about the various political factions and events in pre-revolutionary Russia are interesting and educational. The reader also gets a sense of late 19th-century Russia in the descriptions of St. Petersburg, the fashions, the customs and culture. On the down side, the numerous characters are not very well developed so it is difficult to keep track of them; as well, I suspect that their Russian names may prove challenging for a North-American reader.

I enjoyed the book very much. It is only my second time reading a novel by a Russian author. I think it will certainly appeal both to Russian history buffs and mystery lovers.