Crisis of Identity by Denise Moncrief 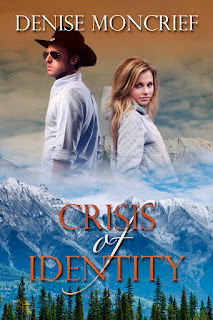 Crisis of Identity by Denise Moncrief
5 Prince Publishing & Books
ISBN: 9781939217301
Published: January 2013
Trade Paperback, 254 pages
The introduction captured my attention right away. The story opens with a young woman helping to identify dead bodies in Galveston, Texas, in the aftermath of devastating Hurricane Irving. That’s her job for the moment, as she says, “forced upon her by a pushy cop.” People who refused to evacuate were told to write their Social Security Number on their arm in the event they didn’t survive. So she is dutifully writing down these numbers in her log until she comes upon a corpse that somewhat resembles her. Seizing the opportunity, she quickly writes her own number on the arm of the dead woman, switches identities, thereby hoping to begin a new life as a different person.

Tess Copeland, a young woman “with a past” thus takes on the identity of Shelby Coleman. Tess/Shelby moves to Aspen, Colorado. However, Tess, a “tough cookie” with trust issues, who is on the run from the law for killing her boyfriend, soon learns that shady people are also on the hunt for Shelby. Tess quickly becomes a target in her new persona. It is the proverbial jumping out of the frying pan into the fire! The action ramps up quickly as bullets and dead bodies seem to pile up around her. Two handsome men, Jake, a US Marshal, and Trevor, a cowboy from Texas, provide the love interest, and she is attracted to both men. But, are they honorable or are there negative agendas at play? Can she trust them? Who is “the good guy?”Hard to decide because no one is who they appear to be, including Tess.

I like the very creative storyline and the development of the main characters as the author gradually and adeptly reveals their true characters and allows Tess to trust again. This is a funny book, too, with snappy comments from Tess, so the reader gets a glimpse into a lighter aspect of her character. After explaining that her brother was swept out to sea during the hurricane, Tess/Shelby says about herself: “the Gulf of Mexico spit me back onto the beach as if the ocean didn’t like the way I tasted.” At one point when Jakes reveals his true identity, Tess says: “You have a lot of explaining to do. I stabbed him with my suspicions, jabbing him here and there with insinuations and implications. I let all my fears jump into my mouth and land on him with the impact of a C-4 explosion.” Wow!

Readers will enjoy this quick-moving adventure/love story. This is my first reading of a Denise Moncrief novel, but it certainly won’t be my last!

Disclosure: Thanks to Denise Moncrief for sending me this book for review. I was not compensated in any other way, nor told how to rate or review this product.