The Arts-Angels Track 1: Drawn to You by Janel Rodriguez Ferrer 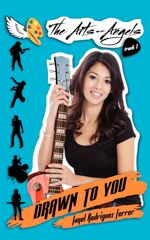 The heroine of the story is strong-minded Gina Santiago, a 13-year-old guitarist and singer from Manhattan who wants to go to the same school as her hero, guitarist Angel “Wings” Dominguez. Despite receiving a full scholarship as an art major to that school, the prestigious New York Academy of Arts & Talents, she is disappointed. Her true love is music - she has song lyrics in her head just waiting to come out! “I love the way it (music) can transport me somewhere else, mentally and emotionally” says Gina.

At NYAAT she meets other talented teens, “schollies” – poor kids on scholarships and “dollies” – kids from affluent backgrounds. Then the inevitable disputes and jealousies erupt between rival girls when the  handsome Craig comes into the picture. When Gina starts up a rock band at school, the one thing that attracts everyone and allows them to put aside their differences is music.

Gina is part of a single-parent family, her musician father having died in an accident before her birth. Although having a strong, supportive extended family, Gina yearns to know more about her own father. She attempts to imagine and draw a picture of him because there are no photographs of him in their apartment. Her mother is reluctant to talk about him, irrationally blaming music as the reason for his death! There is also some mystery involving Gina’s mom and a student called Willa. All is resolved!

This is a great book for teens and adults who want a fast-paced and charming read. It is well written by a young author not far from the teen years herself. She thus writes an entirely believable story with an authentic voice as she describes the typical parent-child tugs-of-war, the striving for independence, the teenage emotions, and the conflicts at school that Gina experiences as she tries to fit in. Cultural identity and family secrets are also explored.

I highly recommend this wholesome book. It rocks!

Disclosure: Thanks to Janel Rodriguez Ferrer for sending me this book for review. I was not compensated in any other way, nor told how to rate or review this product.