Posted by Laura at Library of Clean Reads on March 14, 2013 in Giveaways Yann Martel | Comments : 0

Life Of Pi On Blu-ray! 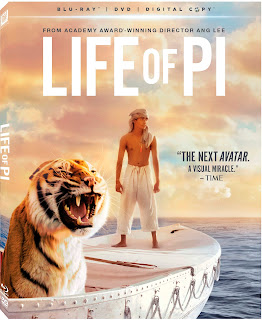 Believe the unbelievable. Twentieth Century Fox Home Entertainment presents a groundbreaking cinematic experience you will have to see to believe when LIFE OF PI debuts on stunning Blu-ray 3D, Blu-ray and DVD on March 12.

Based on the acclaimed best-selling novel from Yann Martel that has been published in 40 languages, and brought to life by visionary Academy Award winning director Ang Lee (Brokeback Mountain, Crouching Tiger, Hidden Dragon), this magical adventure of hope, wonder, survival, and the power of the human spirit has been celebrated by critics all over the world. A “magnificent and moving” (Peter Travers, Rolling Stone) motion picture event that has been hailed as “a masterpiece” (Betsy Sharkey, Los Angeles Times), taking in over $500 million in worldwide box office.

LIFE OF PI follows Pi Patel, a young man on a fateful voyage who, after a spectacular disaster, is marooned on a lifeboat with the only other survivor, a fearsome 450 lb Bengal Tiger named Richard Parker. Hurtled into an epic journey of adventure and discovery Pi and his majestic companion make an amazing and unexpected connection.

A must-have for fans of drama, adventure and family films, LIFE OF PI is one of the most ambitious films to date.

Watch the trailer. It's awesome!

Twentieth Century Fox Home Entertainment is graciously offering one copy each of LIFE OF PI on Blu-ray to two of my readers. For a chance to win, you need to:

Extra entries:
MUST be a separate comment or it will not count.
1) If you are a follower, new or current, leave a comment telling us so.
2) Follow Twentieth Century Fox Home Entertainment on Twitter @FoxHomeEnt, and tell us you did in a comment here.

*Buttons for following found on top left-hand corner of blog.
*Giveaway ends March 28, 2013.
*Open to US and Canada.
*Please read my Giveaway Policy before entering my giveaways.

Disclosure: I have not seen this movie and therefore cannot say if it is a clean movie. However, reader reviews do state that this movie is inappropriate for young children as they may be upset and disturbed by the scenes of animals in pain or being killed. I have not been compensated for offering this giveaway.