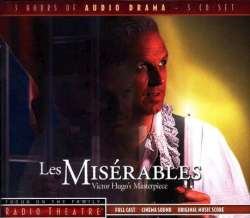 I fell in love with the story of Les Misérables when I first read it in high school in my French class. Since then I've seen a theatre production of it and I now want to see the latest movie version. When I saw this audio drama from Focus on the Family Radio Theatre I knew I wanted to listen to it. Oh my goodness! What an amazing production! I LOVED it so much as it made me rediscover what I knew all along—that Victor Hugo wrote a masterpiece, a moving tale of redemption, forgiveness, love and the power of the human conscience.

This audio production is different from an audiobook because it is not a reading of the novel but an adapted version of it with cinema sound effects, orchestrated music, and British actors playing the role of the various characters much as in a movie. Each actor's voice suited the character he played. There is a full cast with 37 people, 8 starring in the main roles. Brian Blessed was perfect in the role of Jean Valjean, as was Geoffrey as Inspector Javert. Tony Robinson's sly weaselly voice suited the despicable Thenardier. They were easy to tell apart and I followed this professional production very well.

This audio drama is 3 hours in length (I could have listened to more!) and was true to Victor Hugo's original novel about Jean Valjean, a man who spent 19 years in jail for stealing a loaf of bread and was then pursued by the law when he disappeared during his parole. He became a reformed man when he was shown mercy and in turn spent his life greatly helping others and clearing his conscience. Listening to this on audio was so touching, and it moved me to tears quite often. By the end, as I was listening to the last of it driving home from work on the highway, I was bawling my eyes out.

This is a great audio to listen to with your family, especially older middle-grade children, but not under the age of 8 as stated on the CD case. It will keep them captivated I'm sure, on long drives or trips. There is not one dull moment and the sound effects and music score are fantastic. My husband happened to listen to a half hour or so of it and has been asking me ever since when I would finish with it so he could listen to it on his drive to work.

This audio drama is a great way to be introduced to Victor Hugo's touching masterpiece. After listening to it, I am interested in other productions from Focus on the Family Radio Theatre.  Highly recommended!

Note: This audio drama contains some mild violence. There are some gunshot sounds during a revolution scene.

Disclosure: Thanks to Tyndale House Publishers for sending me this complimentary audio drama for review. I was not compensated in any other way, nor told how to rate or review this product.