The Discovery by Dan Walsh 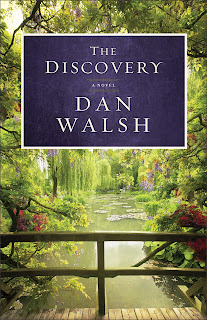 
What would it be like for an aspiring writer to find the unpublished manuscript of his deceased grandfather, a man who had been a best-selling author and whose thrillers sold into the millions? This is the premise of The Discovery. The story is told from the point-of-view of Michael, a newly-married man who just inherited his grandfather's estate. When he finds the manuscript, he begins to read it, intrigued by the love story within its pages. Most of the book consists of the manuscript itself, the story that takes place during WWII and its characters.

The book has a very slow start. Michael and his wife are one-dimensional characters, not too exciting. I couldn't tell how old Michael was. He could have been twenty or forty. The beginning consists mainly of how excited they are to inherit so much money, and how they will spend it. We also learn that Gerard Warner, Michael's grandfather was an elusive man, who kept himself well-hidden from the media. Michael's own family knew little about his grandparents.

The historical story in the manuscript was more interesting than that of Michael's. It was the story of Ben and Claire, a young couple who fall deeply in love. But it also includes Nazi spies and sabotage, and I learned a part of American history regarding WWII that I wasn't aware of. The author, Dan Walsh, based the setting and backdrop of the story on these fascinating historical facts. Ben was the most interesting character for me, and so was his story. As Michael finishes reading the manuscript, he makes a discovery which any reader will guess long before he did.

I enjoyed the historical part of The Discovery, but was not so invested in the modern part because there really was no story. The little that we read about Michael and his wife before and after the manuscript story is not enough. It has no tension, no climax. Just a man who makes a family discovery which motivates him to have more self-confidence.