Kid Konnection: The Tale of Time Warp Tuesday by Leslie A. Susskind 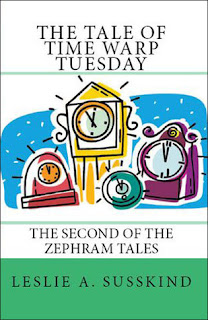 This is the second book in the Zephram Tales. We really enjoyed the first book The Month of Zephram Mondays, and my daughter and I were happy to join the Royal Quadruplets in another adventure. This time the non-magical four siblings are stuck in a time warp where every day is a Tuesday. They have the exact same schedule every day over and over and realize that the rest of the magical Kingdom is not aware of what is happening. The Royal Quadruplets embark on a quest to find out why this has happened and what they can do to rectify it.

As in the first book, the Royal Quadruplets are great characters with Tom as the super smart one, Lizzie the shy one, Ned the prankster and Nell the outspoken one. The author once again does a great job of developing their different personalities, emphasizing their uniqueness through their dialogue and actions. Any tween could relate to them because they talked and acted like tweens. My daughter liked this foursome a lot.

The story starts out well, if a little slow. The reader, of course, knows about the time warp and it seems it takes the four kids a little too long to figure it out. The Royal Quadruplets are bored with the same day happening over and over, and by the middle of the book, so were my daughter and I because we wanted some action. They finally decided to go see the History Writer two thirds into the book and the action picks up as a new character is introduced and the villain discovered. This last part seemed too short, though, hurried along after the long time spent building up to it.

However, once again, as in the first book, the Royal Quadruplets learn new things about themselves that are empowering. Although they are not magical like the rest of the Kingdom, they have unique qualities that can be just as powerful as being magical. My daughter and I really liked how the siblings worked together, but also teased each other like most kids in families do.

The tale continues in the third book of Zephram tales, Wednesday When the Rock Field Rang coming out in 2013. My daughter and I are curious as to what other adventures await the Royal Quadruplets.