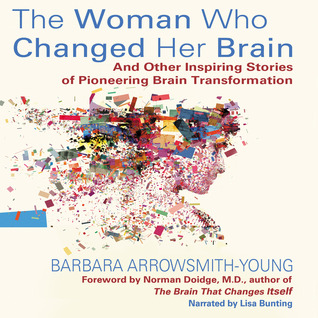 
Fascinating! Absolutely fascinating. When I saw this title, I knew I wanted to read it. Part memoir and part educational and resource book, The Woman Who Changed her Brain, is about the story and work of Barbara Arrowsmith-Young, a remarkable woman and Canadian pioneer in the practical application of “neuroplasticity.” Not only was she born with severe learning disabilities that had her struggling with language, spatial awareness, and symbolic thinking, but she overcame them after she came upon the works of famous Russian neuropsychologist Alexander Luria, which inspired her to invent cognitive exercises that changed her brain!

Arrowsmith-Young explains how the brain is not a machine, it is malleable, plastic, and can change itself. It can be rewired or remapped so to speak. It is ever-changing, physically, chemically and functionally. She states, “Just as our brains shape us, we can shape our brains.” And so that is what she did by doing cognitive exercises for many hours daily until there was a shift. The author interweaves her personal story (her own anguish and constant learning battles) with the school she went on to open and the brain training program she developed that has helped thousands of children and adults. I found both her story and that of the case studies fascinating and touching. Some might find that there are too many case studies but I liked hearing them all.

I love the field of neuroscience and since I work with individuals who suffer cognitive deficiencies because of diseases such as Alzheimer's, Parkinson's and stroke, I always look to learn more so as to better understand the population I work with. My knowledge of neurological deficits and how they are manifested has been opened up with this book. When she mentioned that some children diagnosed with ADHD or other behavioral problems may be in fact suffering from neurological deficits, a light bulb went on in my head. I worked in this field and saw countless children given drugs (Ritalin) at an early age when perhaps they could have been helped through tailored cognitive exercises?

I enjoyed listening to the audio version of this book. The narrator's voice was that of a mature woman, which suited this book since the author uses the first person POV and so I almost felt like it was the author herself talking to me. The narration was appropriate to the subject. Listening to this audio has convinced me I need to get the print book too. Because there is information in this book that I would love to access readily, I would have liked if the chapters would have been indicated on the CDs, so that if I want to listen again to, let's say, the chapter that dealt with object and face recognition, I would know on which CD it was found.

This book is inspirational. Being a practical person, though, I would have liked to know more (oh, much more!) regarding the tailored cognitive exercises Arrowsmith-Young developed. This is a brilliant, compassionate woman and her revolutionary teaching methods have inspired me in my own career. In other words, I now want to do more research on how to help those suffering from a neurological deficiency. And it has also inspired me to challenge myself to keep my brain as active as possible.

I highly recommend this book to anyone interested in learning more about how the brain functions. I think it's an enlightening book for teachers, parents, and anyone working in the helping field. It will increase your empathy toward others as you might recognize that the reason Joey is misbehaving in class is because he has a symbolic thinking deficit and cannot properly process the teacher's instructions. One of the best book I've read in 2012.

Note: This book is rated C = clean read.
You can find more info on this audiobook and other educational ones at Post Hypnotic Press.

Disclosure: Thanks to Carlyn Craig from Post Hypnotic Press (through Audiobook Jukebox) for sending me this book for review. I was not compensated in any other way, nor told how to rate or review this product.

Sound Bytes is hosted by Devourer of Books, a weekly Friday meme where you can link up your audiobook reviews.