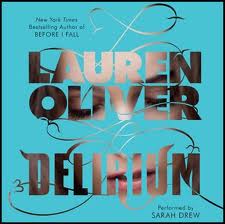 I have been wanting to read this book forever and so finally decided to listen to the audio book for three reasons. The first is that it was listed as one of Goodreads top best YA audio books, second because listening to it fitted my schedule better than reading it, and thirdly because I just discovered the allure and excitement of audio books. This book was everything I hoped it would be. Exciting, passionate and a fantastic listen!

Magdalena (Lena) lives at a time when love is considered a disease—amor deliria nervosa. They discovered a cure for it, a procedure that every person goes through when they turn eighteen. The cure kind of numbs the people so that they do not feel the passion and pain that is associated with love and euphoria. Lena is an orphan living with her aunt. Her own mother, who had been submitted to the cure procedure three times without the desired effect, committed suicide when Lena was six years old. Lena is looking forward to the cure because she doesn't want to end up like her mother, but then she meets Alex and everything changes.

Essentially, for me, the story delves deeply into the themes of love, eros and filia, shown through her relationship with Alex, her best friend Hannah, and her mother, as seen through flashbacks. I liked all these characters and was certainly able to relate to Lena's feelings as she experienced the beauty of first love. It brought me back to my own teenage years. Of course being Italian, I totally got and absolutely loved the whole two-young-people-in-love-against-the-world concept (think Romeo and Juliette) as well as Lena's frustrations with the deluded world in which she lives.

The narrator does an excellent job of capturing Lena's voice and my heart raced as the narrator's voice intensified as the plot climaxed. She captured the moments of teenage angst, the coldness of the aunt, and Alex's tender love for Lena. I relished this listening experience, savoring every minute. This is the first YA audio book I listen to and it's made me eager to listen to others in this genre.

The ending left me soaring and eager to read the next book in this trilogy, Pandemonium. There are a few important threads left hanging, as is expected of an ending to the first book in a trilogy. If you want to read this book, but don't have time, consider the audio book. It's really worth listening to.

Note: This book is rated P = Profanity for 2 f-words and a few mild religious expletives, and S = Sexual for one scene with some nudity, no sex.
I will count this book toward the following challenges:  Dystopian Reading Challenge

Disclosure: I borrowed this audio book from the library. I was not told how to rate or review this product.