A Farewell to Arms by Ernest Hemingway 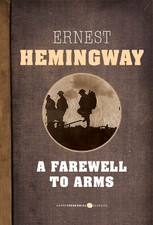 When Anna from Diary of an Eccentric and Serena from Savvy, Verse & Wit organized a read-a-long for this book, I jumped in, wanting a chance to read a classic. I may have read and studied For Whom the Bell Tolls in high school, but other than that I have no recollection of reading Ernest Hemingway's works, touted as one of America's greatest writers.

As I began to read, I realized Hemingway's writing style is sparse, revealing little emotion, except that his use of certain words reveal much, such as the descriptions of the change of season, the rain that is constant throughout, bleak and penetrating, like the war. Very different from most books whose setting is Italy. But then again, the story is about Tenente Frederic Henry, an American in the Italian Army during World War I, and his romance born out of desperation with a British nurse, Catherine Blakely.

Henry is an ambulance driver in the army, a man who takes decisive action and has a wry sense of humour. Not much else is known about him, such as why he joined the Italian Army. He becomes injured on duty and is taken to the hospital where his relationship with Catherine blossoms into an affair. They pretend they are married and everything is wonderful, and their relationship continues on this way even later when she is pregnant. It forebodes bad times ahead leading to an ending I found abrupt, with unresolved issues, and ultimately very sad. The most interesting part of the book is when the army decides to retreat and some of the officers are accused of deflecting and are killed. Henry escapes with his life and it is never known if the authorities catch up to him eventually or what happens to some of his close army buddies.

Sometimes when I was reading scenes with dialogue, it was almost like reading a play. I had to fill out the rest with my imagination. I caught the humour and perhaps at times the irony or sarcasm in the speech, but I will be honest in saying that there are several scenes that were boring, repetitive, and frustrating. Catherine irritated me at times with her clinginess, but with a War raging it was understandable, after all they were both young and if they were juvenile and petty it was a way to cope with the heaviness of the war. I did enjoy the Italian references to places and food and the expressions some of the Italian soldiers used. Rinaldi was very Italian, kissing Henry every time they met, a customary Italian way of greeting.

A Farewell to Arms is easy to read, but not always easy to understand. I would have wanted to know more about Henry's feelings, especially since the story is written in the first-person point of view. I'm not sure I will attempt another Hemingway novel. His writing style leaves much to be desired for me. However, it's clear Hemingway's own experiences during the war make this a diary-like story (albeit an emotionally-restrained one) of a soldier during WWI and a good study in the effects of life in wartime.

Disclosure: I bought this book from the Kobo store. I was not told how to rate or review this product.