Whatever After: Fairest of All by Sarah Mlynowski (Review and Author Event) 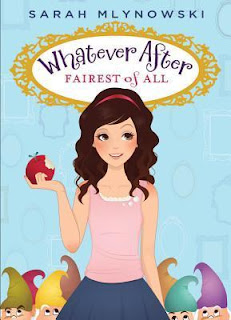 When we got this book for review and knew the author was coming to Montreal, we cracked it open, snuggled in bed together (my daughter and I) and began to read. Initially, my son did NOT want to join us in reading what he called "a girly book", but when he heard us giggling he sneaked in to see what the fuss was all about.

Late one night, 10 year-old Abby and her 7 year-old brother Jonah notice something strange about the mirror (left behind by the previous owners) in the basement of their new house. Before they know what's happening it sucks them in and lands them in Snow White's fairy tale. Their presence changes the story, and they race to fix it before their parents wake up (in real life) and find them gone. What ensues is a funny and adventurous story with a twist at the end.

My kids and I liked this cute tale for several reasons. They could easily relate to the brother and sister duo who are similar in age to them. Abby and Jonah squabbled and cared for each other, displaying a healthy sibling relationship. Abby looked out for her brother and he pushed her to be more adventurous. The dwarfs were funny too, and we laughed out loud several times. Snow came across as very naive, but she found her voice toward the end of the book. And the evil queen was not scary. Neither were the crocodiles in the moat. These elements made this book suitable for a younger middle-grade audience rather than an older one.

We liked how the author introduced a fun and different version of the fairy tale. We were curious to see how it would all end. Being in the fairy tale also made Abby realize that moving to a new home and school was also about accepting change, which was hard for her at the beginning.

The book is easy reading and would satisfy early readers who love fantasy books and fairy tales. It's also great for reluctant readers because it has lots of dialogue and double-spaced text that is easy on the eyes. The ending left room for other adventures, and we look forward to learning more about the mysterious mirror in the basement and where it will lead Abby and Jonah next.

And so we met author Sarah Mlynowski! 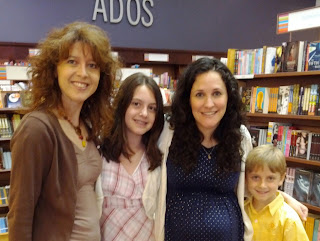 My kids and I arrived at Chapters bookstore in Pointe Claire and heard Sarah talk about the Whatever After series. I also learned that she has written a slew of books. She started her career by writing adult novels, then YA and now she has branched out to middle-grade. She told me that soon she would probably be writing picture books. With a little daughter and another one on the way, I could easily see this happening. She was very pregnant and looked fabulous!

She signed my kids' copy of Whatever After and I also bought a copy of Gimme a Call, one of her YA novels, and had her sign it. Sarah came across as super friendly, unpretentious, and happy to meet the crowd of parents and kids that showed up. She is originally from Montreal now living in New York and told us she loves visiting our city. I look forward to reading more of her books!

I also met two other local bloggers there. Cindy from Cindy's Love of Books and Lucy from Moonlight's Gleam Bookshelf. A big thank you to Nikole from Scholastic for telling us about this event!

Disclosure: Thanks to Nikole Kritikos from Scholastic for sending us this book for review. We were not compensated in any other way, nor told how to rate or review this product.