The Milestone Tapes by Ashley Mackler-Paternostro

Posted by Laura at Library of Clean Reads on May 18, 2012 in Adult Book Reviews Ashley Mackler-Paternostro cancer dying | Comments : 0 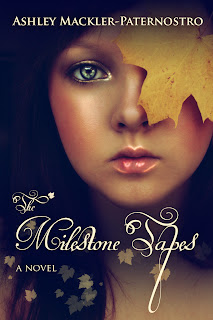 The Milestone Tapes is one of those books that really touched me because it is about the journey of love between a parent and child. Jenna Chamberland loves being a mother, but after a 3-year battle against breast cancer, she is dying. She makes the decision to stop treatment so that she can spend the most quality time left with her family, especially her 7-year-old daughter, Mia. Jenna records a set of ten audiocassettes that her daughter can listen to as she grows older and goes through different milestones in her life that her mother would have helped her through had she been alive, such as her first love, college graduation and her wedding day. What a loving provision and legacy from a mother to her daughter!

As I began reading this book, I realized there were several similarities between Jenna and myself. Jenna was married for about twenty years, had a loving husband, Gabe (who reminded me so much of my own hubby!) and had a child later in life. So in this respect I could really relate, and my heart broke time and time again as she tried to deal with her situation. I kept asking myself how I would have dealt with dying had I been in the same situation.

The novel is divided into two books. The first part is Jenna's story and the second, taking place nine years later, is Mia's. The novel flows well and Jenna is very much alive even in the second part through the milestone tapes she leaves for her daughter. I loved reading this part the most. It read like a YA novel and I liked Mia, who was then a sixteen year-old teen. The first part was very emotional and I was in tears as Jenna's illness progressed.

I was surprised how well the author dealt with the sensitive topics of dying and motherhood. She has no children of her own, but captured the love and complex bond between mother and child. The characters were real to me, especially Mia and Ginny, with her words of wisdom. The only relationship I found underdeveloped was that of Jenna and her sister, Sophia. At the onset, Jenna has a strained relationship with Sophia who harbours resentment from childhood, but this gets quickly resolved within a few pages. It wasn't realistic to me. This could have been better explored, while some mundane everyday dialogue and scenes eliminated.

I think the beautiful book cover captures the essence of this novel. It is haunting and symbolic. Better editing was needed, however, as I caught many typos, missing words and repetitions, especially in the latter part of the book. Barring this, I think this is a beautiful and well-told story. Ashley Mackler-Paternostro is an author to watch out for, having shown talent by writing a story that pulled at my heartstrings. I look forward to reading her next novel.

Note: This book is rated P =Profanity for 8 f-words, some religious expletives and crude words, and S = one sex scene between a married couple.