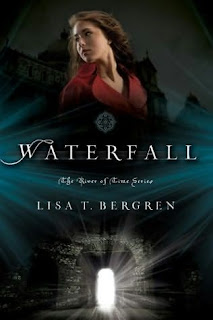 I have been waiting so long to read the River of Time Series, that it was pure bliss when I found just the right time in my schedule to savor it. And savor it, I did! It's a novel that blends two of my favorite genres—time travel and YA historical fiction.

The Betarrini sisters, Gabi (Gabriella) and Lia (Evangelia) are in Tuscany, Italy with their mother, an archeologist. While trekking with her through the medieval ruins, they decide to explore a little on their own. The girls end up in an ancient tomb where they place their hands on a handprint on the wall and travel back to 14th century Italy. Gabi finds herself right in the middle of a battle between enemy knights. We don't know what happened to Lia until much later on in the book. The second book deals more with Lia's story.

Gabi is rescued by the handsome knight Marcello and taken to his castle, where she explains that she has lost her sister and mother while journeying and must find them as soon as possible. They accept her story and make plans to help Gabi to find her family. As Gabi adjusts to medieval life, she uses her 21st century knowledge to her advantage. She helps Fortino, Marcello's elder brother who has a respiratory illness, and she insists on accompanying the knights (riding astride like a man, gasp!) as they search and make enquiries for her mother and sister. Her bold personality as she battles alongside the men using a sword makes her stand out. Gabi and Marcello are attracted to one another, but he is betrothed to Lady Rossi. This is a good political match because it will unite Marcello's family with that of the powerful Rossi clan from Siena.

I really enjoyed this book. It was adventurous, fun and action-filled. It was also far-fetched with Gabi being able to do a lot—speak almost flawless Italian, wield a heavy sword, be at liberty to do as she pleased—but hey, in a time travel book it works. However, I would have liked to see more reactions to living in the past and have Gabi learn from being there rather than knowing how to do it all. I found Gabi's inner dialogue funny as it reminded me she was a 21st century girl stuck in the 14th century. Sometimes, she did things that had me shaking my head. She was stubborn and insistent on having it her way. This same determination, however, served her purpose as she searched for her sister and a way to get back home.

Both Marcello and his closest man Luca were brave and swoon-worthy knights, of course. Luca was the light-hearted one while Marcello more brooding. I particularly liked Fortino, the sick brother, who was wise and never complained of his ailment. There are many battle scenes with killing and I wish this had been tamer seeing this is a YA book.

The minute I ended this one I was reaching out for the second book in the trilogy. I'm looking forward to reuniting with the Betarrini sisters to see how their adventures continue. This book is the perfect book to escape—it's exciting, gutsy and venturesome.