A Traveller in Time by Alison Uttley 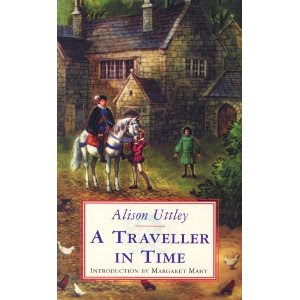 I enjoyed this historical fiction/time travel book very much. Time travel and the real-life story of the ill-fated Mary Queen of Scots overlap.

This tale is lived through the eyes of a young English girl, Penelope, who travels to visit relatives in Derbyshire. They live at Thackers, a manor house once inhabited by the Babington family of 1582. The Babingtons were supporters of Catholic Mary Queen of Scots and wanted her restored to the throne. So that is the backdrop to the story.

Penelope begins her experience of time travel by seeing a face that is not hers staring back at her in a mirror. She them opens a bedroom door to find four women dressed in clothes of an earlier time. “They were young and pretty. Their dresses were made of stiff brocade and their pointed bodices were embroidered with tiny flowers. On their heads they wore little lace caps. Each wore a narrow lace tucker around her neck, and rings glittered on white hands.” Rooms are altered, strange smells pervade and Penelope is frightened. She returns to the present, circa 1934, but soon runs up to her bedroom to change clothes only to find herself falling back into the 1500’s. She meets an ancestor of hers living in the house, Anthony Babington.

Penelope slips effortlessly between the past and the present. At one moment she is sitting in the garden of the 1930’s and then in the same garden of the 1500’s. Attempts are underway by members of the Babington family to free the imprisoned Queen. She becomes involved in the Babington Plot to save the Queen and the reader gets a bit of a history lesson here. It is a bittersweet story because Penelope develops close friendships with the people that she meets in 1582, but knows that she cannot stay there. “I didn’t want to lose this possession of mine, which gave me the power of passing into other layers of time, to share the lives and loves of those who dwelt here. I went out of the room with aching heart….” Moreover, she is aware of the fate of both the Queen and the primary plotter, Anthony Babington. Both will be executed, but Penelope is unable to change the future.

The book is written for a young audience but I don’t think today’s youth would be attracted to A Traveller in Time as it is written in an old-fashioned sort of way using the language and style of the 1930’s. That being said, I personally like the expressions the author uses, such as “I lifted the latch and stepped down the little stairway into the corridor of time.” About Mary Queen of Scots she says “she was alive, but she was dead, and always she was immortal.” “It was neither dream, nor sleep, this journey I had taken, but a voyage backward through the ether.”

It is an old-fashioned book, in many respects, but an interesting take on time travel and history. It will appeal to readers interested in the Elizabethan era and particularly the events surrounding Mary Queen of Scots.

This book is rated C = clean read.
I will count this book toward the 2012 Time Travel Challenge.