Once Upon a Rose by Judith O'Brien 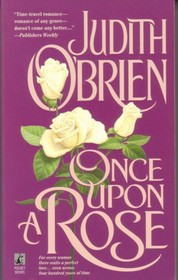 I haven’t had this much fun with a book in a long time. It is totally amusing, hilariously funny, and best of all, it deals with one of my favorite subjects – time travel!

Deanie Bailey is a country-western singer making a music video at Hampton Court in England in the 1990’s. While she is dressed in 16th-century style clothes for her video, she goes into the maze for a bit of privacy when she experiences what she thinks is an earthquake. In reality she has been pulled back in time to 1540. She encounters a man she believes to be an actor but who proves to be Christopher Neville, Duke of Hamilton, and aide to King Henry VIII. She must now learn the ways and customs of the time and Christopher “Kit” helps her to do that. Deanie falls in love with him. When“Kit” makes a paper airplane for the king, Deanie realizes that he is also a time traveler, but from the 1940’s wartime era.

King Henry is captivated by beautiful Deanie who claims to be from Wales as an explanation for her “strangeness”. He wants to make her his mistress (no surprise there) which she manages to avoid. She sings a medley of Patsy Cline hits, like “I Fall to Pieces” and “Crazy” and “Sweet Dreams of You” for Henry (imagine Dolly Parton meets Henry VIII) and he sings “Greensleeves”, his own composition, to her. Deanie becomes lady-in-waiting and friend to Anne of Cleves, Henry’s 4th wife. And though she wants to return home to the US, Deanie feels compelled to stay in England in 1540 in order to prevent the death of Anne at the hands of Cromwell. “What if we somehow have changed history?” Deanie says. As we know Anne of Cleves was divorced from Henry, escaped death and remained friends with him.

Eventually Deanie and Kit return to present-day England together via the maze, but once back in the present she is unable to find him. For some unknown reason they are separated for months until Deanie sees him in the audience at one of her concerts and the rest is history, as they say.

There are “thee’s” and “thou’s” aplenty so as to make the feel of the book authentic as are the descriptions of the clothes and head coverings of the time. Words take on alternate meanings depending on the when they are said. For example, Deanie says “I don’t know about you, but these dogs are barking.” Kit responds, “Dogs? I hear no hounds.” “No, I mean my feet hurt. These stone floors are about as comfortable as asphalt in July.” And how do you explain Velcro to someone of the 1500’s? And what about donuts? Deanie makes them for the king and he loves them!

If you like time travel, the Tudor era, Southern belles and good ole’ boys and above all, humor, you will enjoy this tale.


Note: This book is rated P = religious expletives and swear words
and S = sexual scene.
I will count this book toward the 2012 Time Travel Challenge.