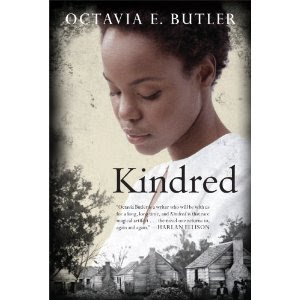 The first sentence of the prologue to this book grabbed my attention and didn’t let go until the last page: “I lost an arm on my last trip home. My left arm.” Of course, I knew that this is a time travel book so I was sort of expecting the unexpected!

Dana, the narrator of the tale, is a young black woman living in California with her white husband, Kevin. Early into the story she “feels dizzy and nauseated” one day and is suddenly transported back to 1815 Baltimore, Maryland. Dana there rescues a small red-haired boy from drowning – “It was the day I met Rufus – the day he called me to him for the first time.” And thus begins Dana’s experiences with time travel. She returns four different times to help Rufus out of one difficulty or another, eventually realizing that the boy/teenager/man she rescues, Rufus, is one of her ancestors. He is the son of a white plantation owner.

Rufus falls in love with and fathers a number of children by a slave, Alice. One of their descendants becomes the family line that produces Dana. As a black woman in the ante bellum South, Dana experiences the horrors and degradations of a slave. She is beaten and whipped and just when she fears for her life, she is transported back to modern times. At one point, in the present, Kevin tries to comfort her. His arms are wrapped around her when she is “called” back to 1815 and he is transported to 1815 with her. Dana spends a few months there and Kevin spends 5 years. When they eventually return to 1976 it no longer feels like home to them as they have become used to living in the past, despite all its challenges. Soon after returning to 1976, Dana is abruptly pulled back to 1815 where she fights and kills Rufus, and in a harrowing experience, returns once and for all to 1976.

The author vividly captures life in 1815 on a slave plantation. “The day was miserably hot and muggy, full of flies, mosquitoes and the bad smells of soapmaking, the outhouses, fish someone had caught, unwashed bodies. Everybody smelled, black and white. Nobody washed enough or changed clothes often enough. The slaves worked up a sweat and the whites sweated without working. Kevin and I didn’t have enough clothes or any deodorant at all, so often, we smelled too. Surprisingly, we were beginning to get used to it.” The reader feels the sheer terror of being black then as Dana talks about the dogs used for hunting down runaway slaves, the beatings, the intimidations, the indignities, and the fear of being found alone by a white man – “the possibility of meeting a white adult here frightened me more than the possibility of street violence ever had at home,” says Dana.

This book will be of interest to those who enjoy novels about time travel, history, slavery, strong women, and the power of family ties.

Note: This book is rated P = Profanity. There are plenty of religious expletives and swearing throughout the novel.
I will count this book toward the 2012 Time Travel challenge.