Big in China by Alan Paul 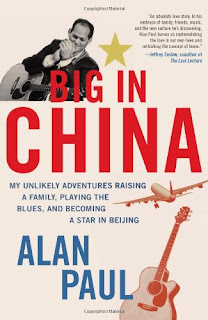 Big in China is Alan Paul's memoir of his three-and-a-half years in Beijing living as an expat with his wife and three young children. His wife Rebecca was offered a job as the Wall Street Journal's China bureau chief, and Alan was a stay-at-home dad and freelance writer. They saw this move to China as an opportunity and they embraced it by working hard and taking frequent trips off the beaten path into the villages in China and mingling with the people.

I simply loved reading about these trips and admired how they did this with three young children in tow. It was also interesting to see how the expat community lived within compounds that were gated and guarded and their homes staffed with servants who did everything: cooked, cleaned and took care of the kids. Although Paul and Rebecca pursued their careers passionately, they were clearly close as a family and made sure to spend time as a family doing things together.

Alan was also editor for Guitar World and loved to play the guitar. One day he stumbled upon Woodie, a hip Chinese man who loves blues music. Shortly after, they formed the blues band Woodie Alan. It was a match made in heaven. Little did they know that their cross-cultural collaboration would become so successful that they would earn the title “Best Band in Beijing” and would go on to tour China and produce a CD album of original songs in both English and Mandarin. Having just finished reading Guitar Zero by Gary Marcus, which explored the science of learning music, I was able to truly appreciate what it took for these men and their band members to play so well together and rise to success so quickly.

Big in China is a well-written, enjoyable read about how one man and his family fell in love with a foreign  country and its people. It's easy to read, and although it opened my eyes to China and its culture, it did not delve into any of the politics and immense social problems known about China. Rather, it focused on Alan's perception of embracing life on unfamiliar territory with his family. It's a heartwarming account of how one man discovered first-hand that people of vastly different cultures are very much alike and yearn for the same things, including the transcending joy from an art that unites people everywhere: music.

Note: This book is rated C = clean read.
I will count this book toward the following challenges: TBR Pile Reading Challenge

Disclosure: Thanks to Lynda O'Connor of O'Connor Communications and HarperCollins for sending me this book for review. I was not compensated in any other way, nor told how to rate or review this product.