Road From the West by Rosanne E. Lortz 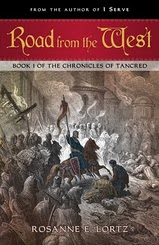 Road From the West is the first book in a trilogy that deals with the First Crusade circa 1095 C.E. It is historical fiction.

The main character is Tancred, a young Norman marquis whose conscience bothers him. He witnesses a dying soldier kissing a cross and experiences nightmares of death, destruction and a priest who appears to condemn him. He vows to never again shed Christian blood and travels to Rome to get spiritual guidance from Pope Urban. The pope urges him to go on crusade to Jerusalem by saying “there is a way to sin by the sword and there is a way to use it rightly……you will become holy through this journey…..do you think that a man who suffers the perils of the ocean, the deserts of Asia, and the swords of the Saracens (read “infidels or Moslems”) will find his suit rejected in the Day of Judgment?” Tancred believes that he can expiate his past sins by killing Moslems and that the pope can grant him absolution. He thus begins his journey from the west to recapture Jerusalem for the “Christians.”

I learned a number of facts while reading this novel, among which are the following: knights were not the only respondents to the call to take the cross. There were “unofficial crusaders”, too, as unarmed and defenseless peasants with wives and children in tow attempted to walk the crusader path, only to be brutally killed; the purpose of going on crusade was at times more temporal than spiritual as some knights were intent on gratifying their lust for power and wealth by defeating cities of the East and assuming the title of king over them; a bishop was the official leader of the crusader force; and finally, the novel reinforces the culpability of the church. After conquering Antioch Tancred commands that 70 heads of defeated infidels be cut off and piled in front of the bishop’s tent. “This is the firstfruits of our conquest of Antioch and it would be sin to withhold from the Church her tithe, “says Tancred.

The author is an intelligent storyteller and is surprisingly familiar with cities such as Nicaea, Tarsus and Antioch, almost forgotten names of the past. She describes them with authority, no doubt as a result of considerable research on her part.

This is a longish novel that may appeal to historical fiction fans who are interested in the remote and bloody period of human history that was the First Crusade.


Disclosure: Thanks to Rosanne E. Lortz for sending me this book for review. I was not compensated in any other way, nor told how to rate or review this product.