Queen of the Summer Stars by Persia Woolley

Posted by Laura at Library of Clean Reads on July 06, 2011 in Adult Book Reviews Arthur and the Round Table Guinevere Historical Fiction Medieval Persia Woolley | Comments : 2 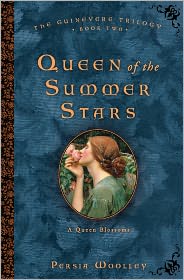 Queen of the Summer Stars is the second book in the Guinevere Trilogy. Although I did not read the first book which dealt mainly with Guinevere's childhood, this book can still be read as a stand alone novel. The story covers her marriage to Arthur and her rule as Queen by his side during the tumultuous years as he forms the legendary Round Table and she deals with her barrenness and her growing love for Lancelot.

Woolley writes with confidence about one of the most famous couples in medieval history. It's clear she is familiar not only with the political issues of that time but also the geography and lifestyle of medieval England. I admire her knowledge of this time period and the ability to bring legendary characters to life. No easy task since much has been written and put to the screen regarding Arthur and Guinevere.

However, this book has a slow start and the storyline is bogged down by details that slow down the plot. There are also a lot of characters that are introduced, and I had a hard time keeping track of them all. If I picked up the book the next day from where I left off, I found myself rereading several passages to get reoriented.

There were exciting parts in this book, only to be followed by excessive details of the court that were not always necessary and actually deflated any tension that was previously built up between characters. Guinevere is a strong female character, though, who wants to be a good queen to her people, and who is loyal to her king and husband Arthur even as she grows to love and desire Lancelot and must fight this. She also fights against evil forces as the practice of witchcraft is widespread throughout the novel. I should have paid more attention when I requested this book for review as this is not an element I am comfortable with in books.

It's an ambitious novel to be sure, but I think I would have preferred a tighter storyline rather than a whole crew of secondary characters I did not always care for. There were several sub-plots with other legendary characters of the time such as Tristan and Isolde. So for die-hard fans of Arthurian tales, Woolley's epic novel will definitely satisfy as it delves deeply into the secrets and struggles of Arthur and Gwen's royal lives.

I will count this book toward the following challenges: Historical Fiction Challenge

Disclosure: Thanks to Danielle Jackson from Sourcebooks for sending me this book for review. I was not compensated in any other way, nor told how to rate or review this product.