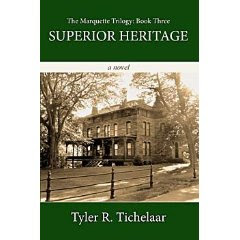 Superior Heritage is the third and last book in the Marquette Trilogy, a multigenerational saga spanning a century and a half. I thoroughly enjoyed all three books and Tichelaar's narration and writing style. Iron Pioneers, the first book, was for me the best of the three because it’s historical—taking place from the founding of Marquette from 1849 to 1900, introducing characters that were among the first settlers of Marquette in the Upper Peninsula of Michigan. The second book, The Queen City, continues the story from 1902 to 1949 showing the changes as one century ended and a new one began, bringing in two world wars and the dawn of technology. Superior Heritage takes place from 1952 to 1999.

Compared to the first two books, the first half of Superior Heritage was a little uneventful. As usual, Tichelaar is a great storyteller and his characters real and so well developed I forget they are fictional.  But there were lots of descriptions of family get-togethers and too much religious philosophy for my liking. It was almost like reading a family diary. I was disappointed that Ellen did not pursue her artistic passion (or at least pick them up in her later years) but faded into becoming John Vandelaare’s mother and settling into what became a passionless marriage, when she had been so adamant not to get married in the first place.
The second half of the book focuses on John Vandelaare and that’s when it really took off for me. The most touching part of this book was the relationship John had with his grandparents and the loss he felt when they died. I felt it too since I had followed their history since the beginning. I liked John and his “old-fashioned” morals, his love for his hometown and his secret passion for writing. I would have liked for Wendy’s character to be more fully developed, though, perhaps to have her enter the story sooner than just toward the very end.
I can’t help but think that John’s character represents Tichelaar himself. As a matter of fact, I think Tichelaar wrote the Marquette Trilogy based partly on his own family’s history. The ending was very satisfying and it kindled a desire in me to search my own family’s roots, and to want to visit Marquette itself! If you live in Michigan, especially in the U.P. (or anywhere else for that matter), I recommend you start by picking up Iron Pioneers and enjoy history through some great storytelling from a seventh generation Marquette resident whose love of the Upper Peninsula resonates beautifully and proudly.
Disclosure: Thanks to ReviewTheBook.com for sending this book for review. I was not compensated in any other way, nor told how to rate or review this product.