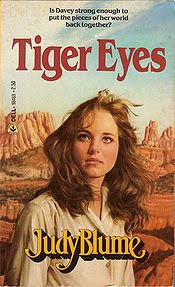 This is one of Judy Blume’s books that I remember the most from my teen years. It’s the story of 15 year-old Davey whose father gets shot to death in a hold-up at his 7-Eleven Store. Written in the first person through Davey’s point of view, the story unfolds quickly placing us into the turmoil of her life as she tries to put the pieces of her world back together.

She and her family (mom and younger brother) move temporarily to stay with relatives in New Mexico, which is very different from her Atlantic City by the ocean. Soon after she moves there she discovers a private place in the depths of the Los Alamos Canyon. That’s where she meets mysterious Wolf whose quiet and understanding friendship helps her to face her tragedy even as he must face his.

This novel deals with grief and a family’s struggle to adjust to the loss of one of its members. It is emotionally engaging, absorbing, and sprinkled with small scenes of humour. Picking up this book now as a parent makes me see things with different eyes. There are a few scenes dealing with alcohol and sexuality. Although Davey is a good kid and does not get involved with drugs or alcohol, there is no moral guidance in her life. At fifteen she was dating and would have engaged in sex were it not for an incident that occurred, stopping the couple from going any further.

Overall, this was an interesting book for me to re-read, but as a Christian I was uncomfortable with a main character who would easily engage in sexual activity with a boy she didn’t even love. Not the kind of morals I would want to instil in my children.

Disclosure: I bought this book at a used book sale. It was not sent to me for review.