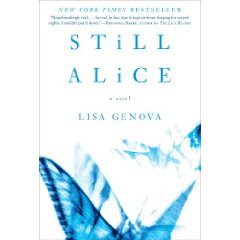 When I first started reading Still Alice, I wasn’t crazy about the main character. But as this was a fiction novel about Alice Howland, a 50 year-old linguistic psychology professor from Harvard who gets diagnosed with early-onset Alzheimer’s disease, I was very interested in the story. As I continued reading, I was not disappointed.

As soon as Alice gets diagnosed, the book took off for me. I couldn’t put it down. The author chose to tell the story solely from Alice’s point of view, and I thought this was brilliant. The reader experiences first-hand the main character’s despair, her fears and frustrations. Although this story has its heartbreaking and sad moments, its ending was, oddly enough, uplifting and hopeful. I took a deep breath as I read the last page and was left with mixed emotions. I wanted to cry, but I was also smiling.

The strength of the story is in its portrayal of Alzheimer’s devastating effects on every aspect of Alice’s life, from her work to her daily life with her grown children and husband, with one exception. No mention is made of how the illness affected Alice’s sexual relationship. Alice and her husband are portrayed as physically fit, active individuals who act more like roommates than a married couple. Since sexual intimacy is a healthy and important part of a relationship, an illness such as Alzheimer’s (where a person begins to forget who their family members are) would definitely challenge how a couple would display affection. Omission of this aspect of Alice’s life may have been intentional on the part of the author to show the evident lack of passion that became almost pivotal as the story concludes with a questionable decision on the part of her husband.

I noted six f— words in this book. Friends have disclosed to me that when a family member suffers from dementia, it is not uncommon to hear them voice many colourful expressions, even if all their lives they were known never to swear or say vulgar things! Again, the author may have included this as a realistic portrayal of the changes that come with losing one’s mind.

There is no doubt that this book has made me see Alzheimer’s with new eyes. Most of us tend to associate this mental (and eventually physical) illness with the elderly population and not with persons in the prime of their life—some getting diagnosed as early as mid-forties. After reading this book, forgetting where you placed your keys may give you a momentary jolt of panic…but as you remember Alice’s story, you will also feel compelled to be grateful for a sound mind.