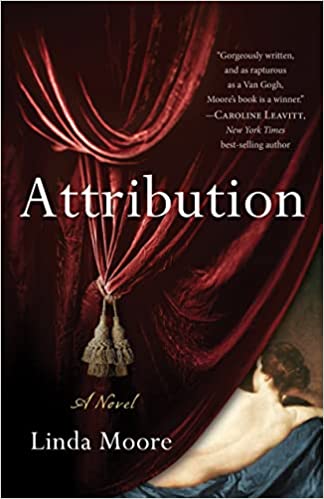 Today I'm spotlighting a debut novel that has one of my favorite subjects (art) as one of its main themes. Check it out.
Book Details:

Book Description:
Art historian Cate Adamson, desperate to succeed to console her grieving parents, leaves the Midwest to complete her doctorate in New York—only to find herself assigned to an impossible sexist advisor. She struggles to impress him until she discovers a hidden painting, possibly a Baroque masterpiece. Risking her career, financial disaster, and further alienation from her family, she flees to Spain with the painting to consult art experts.

Antonio, an impoverished duke, meets Cate on the train to Seville and joins her search while attempting to rescue the decaying legacy of his family. They find clues and uncover evidence that will shock the titans of art history, may destroy her prospects as an art historian, and shatter her future with Antonio.

Written with vivid prose, rich references to seventeenth-century Spanish art, compelling characters, and a historical puzzle, Attribution is the story of one contemporary woman’s journey to understand the past and unlock her future.
Buy the Book:
Amazon
Add to Goodreads
Interview with Linda Moore:
LCR: When were you first inspired to write your debut novel, Attribution?

LM: Over twenty years ago, I attended a presentation by a former curator at Yale University who worked on attributing a painting from Spain’s golden age. I was riveted by all the components of the process—the science, the connoisseurship (using the educated eye), the history-- and the controversy it created. A little voice in my head said this would make a great novel, but I put it aside while I worked on something else. I began research and writing on what became Attribution about 2015, so seven years ago.

LCR: Can you tell me more about your new book Attribution?

LM: Cate Adamson struggles to deal with her family’s grief over Cate’s brother’s death and she leaves the Midwest to complete her art history doctorate in New York in an attempt to focus her parents on the future. An impossible faculty advisor blocks her dissertation, and she despairs she will fail the program until she finds a painting in the basement of the university. She believes the artwork is a Baroque masterpiece and she takes it to Spain to search for experts and documents to prove it.


LCR: What was the most surprising thing you learned in creating your characters?

LM: I completed the novel with the subplot about Cate’s younger brother drowning. I know you might find this hard to believe, but when I’d finished that draft, it hit me that this was my story, my younger sister drowned in the north of Spain when she was twenty. While I wrote it, I did not think consciously about that connection. It was a story that came from deep inside me and obviously, I needed to tell it.


LCR: Is there a work of art that you love. Why? Have you ever visited it in person?

LM: Many, so many. Some are in my home and I say hello to them every morning. I love Velázquez's Rokeby Venus or Venus at Her Mirror a detail of which appears on ATTRIBUTION's cover. It's in The National Gallery, London and I have seen it many times. The painting has many unanswered questions: Who was the model? Whose face likely not the model by the angle, is in the mirror? How did Velázquez manage to paint a nude in the religious Spanish court where he had his studio? Did he paint it in Italy? In the early 1900s, a suffragette entered the gallery and slashed the canvas with a knife because she felt the work objectified women.

LCR: When choosing a vacation, do you prefer a City or Rural destination? Why?

LM: I am a city girl who enjoys museums, restaurants, and yes, shopping, but I enjoy untouched remote places like Antarctica where I have been three times. I have been to over 100 countries and that sounds like a lot but there are, depending on how you count, over 200 countries. I want to see places I have not visited like the Gobi desert in Mongolia, Tunisia and oh, Turkey, would love to go to Istanbul.

LCR: What is your most memorable travel experience?

LM: One standout is Aldabra Island in Seychelles. Seven researchers live with 100,000 giant land tortoises who roam this atoll. The lagoon stretches twenty-four miles across and each day empties with the tide and refills again. Unlike anywhere. I have a long list of memorable experiences from all the continents and over 100 countries I’ve visited.
About the Author:

Linda Moore studied art history in the Prado while at the University of Madrid. She earned degrees at the University of California and Stanford before opening an art gallery that showcased contemporary Hispanic artists. She has served on art museum boards, edited and published exhibition catalogs, contributed to anthologies, and written for art journals. Born in the Midwest, she enjoys traveling the world, spending time in Kauai with her grandchildren, and she lives in California with her husband. Attribution is her first novel.