The lovely Sheila at Book Journey is once again hosting First Book of the Year and this is the 7th year I participate. It's a meme where we share the first book we will be reading in 2021. And it gets me all excited for another year of great reading.
So what is the First Book of the Year? It should be:

C. Really whatever you want it to – it is after all YOUR First Book of the year. 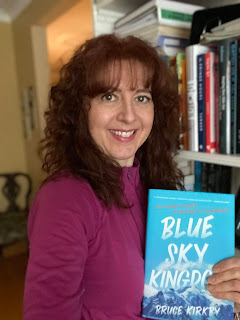 I've decided my first book of the year would be a nonfiction book that I've been wanting to read ever since it was first sent to me: Blue Sky Kingdom by Bruce Kirby, a book that explores the themes of modern distraction and the loss of ancient wisdom. This book fits in with my goals this year of staying focused on my priorities. 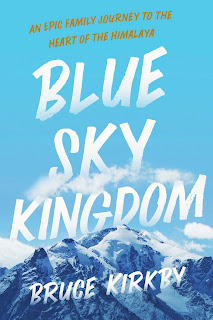 A warm and unforgettable portrait of a family letting go of the known world to encounter an unfamiliar one filled with rich possibilities and new understandings.
Bruce Kirkby had fallen into a pattern of looking mindlessly at his phone for hours, flipping between emails and social media, ignoring his children and wife and everything alive in his world, when a thought struck him. This wasn't living; this wasn't him. This moment of clarity started a chain reaction which ended with a grand plan: he was going to take his wife and two young sons, jump on a freighter and head for the Himalaya.
In Blue Sky Kingdom, we follow Bruce and his family's remarkable three months journey, where they would end up living amongst the Lamas of Zanskar Valley, a forgotten appendage of the ancient Tibetan empire, and one of the last places on earth where Himalayan Buddhism is still practiced freely in its original setting.
Richly evocative, Blue Sky Kingdom explores the themes of modern distraction and the loss of ancient wisdom coupled with Bruce coming to terms with his elder son's diagnosis on the Autism Spectrum. Despite the natural wonders all around them at times, Bruce's experience will strike a chord with any parent—from rushing to catch a train with the whole family to the wonderment and beauty that comes with experience the world anew with your children.
My review will be up later this month.
So what is your first book of the year?