To Kill A Mockingbird by Harper Lee - Graphic Novel (Review) 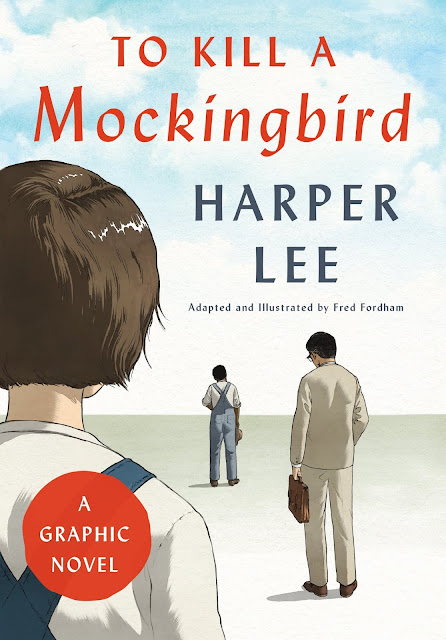 A few years back, for my book club, I simultaneously read this book and listened to it on audio. I was happy to revisit this classic as a graphic novel. See my thoughts below.

Book Title: To Kill A Mockingbird by Harper Lee

A haunting portrait of race and class, innocence and injustice, hypocrisy and heroism, tradition and transformation in the Deep South of the 1930s, Harper Lee’s To Kill a Mockingbird remains as important today as it was upon its initial publication in 1960, during the turbulent years of the Civil Rights movement.

Now, this most beloved and acclaimed novel is reborn for a new age as a gorgeous graphic novel. Scout, Jem, Boo Radley, Atticus Finch, and the small town of Maycomb, Alabama, are all captured in vivid and moving illustrations by artist Fred Fordham.

Enduring in vision, Harper Lee’s timeless novel illuminates the complexities of human nature and the depths of the human heart with humor, unwavering honesty, and a tender, nostalgic beauty. Lifetime admirers and new readers alike will be touched by this special visual edition that joins the ranks of the graphic novel adaptations of A Wrinkle in Time and The Alchemist.

A few years back, for my book club, I simultaneously read this book and listened to it on audio. I was happy to revisit this classic as a graphic novel. And I loved it. Fred Fordham has succeeded in bringing to life this coming-of-age American classic tale of injustice, racism and standing up for what is right.

This graphic novel follows the text and story closely, with illustrations that depict well the South in the 1930s. The colors are earth-toned, and suit the story and age group. At times they are dark, making it difficult to distinguish the scene in detail. It's a graphic novel that will appeal both to adults and YA alike. There is language in this novel so parents of middle-graders may want to consider this aspect of the novel and perhaps use this occasion to discuss how language affected racial prejudice and social class of that era and also today. There are so many lessons this book teaches without being preachy. 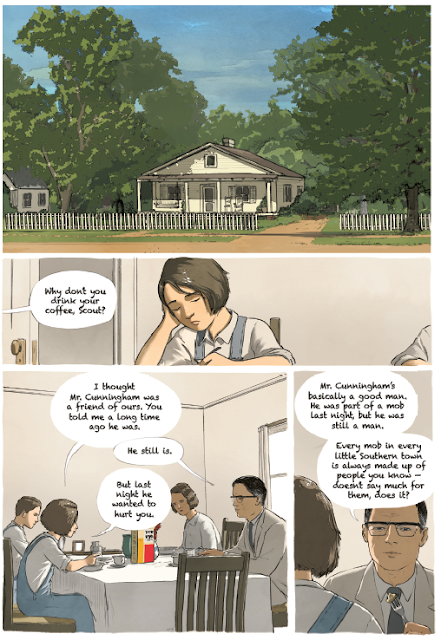 As in the full-length novel, the story is narrated by Scout, a brilliant child, raised by a father who encouraged her to read from a very young age. Mr. Finch, who is Scout and Jem's lawyer father, is a wise man with a quiet way about him. He shows deep undestanding of human behaviour and prejudice. He was also courageous in taking on the case of a black man accused of raping and beating a white young woman. Even though I had already read the book, I still found myself flipping the pages in suspense as I read this graphic rendition. 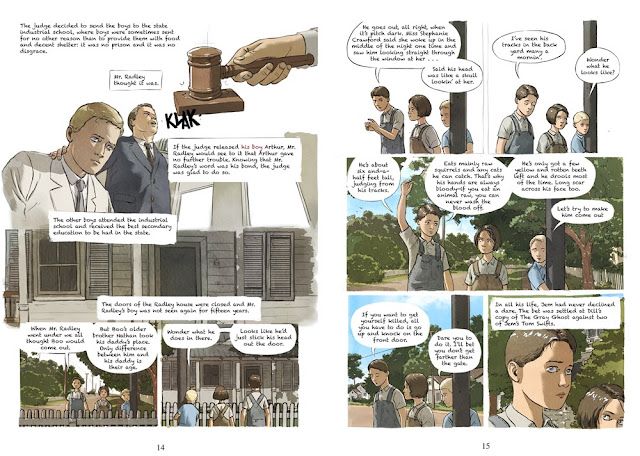 This novel is a keeper on my shelf. I will encourage my teens to read it and then I'll suggest we watch the 1962 movie with Gregory Peck. I'm sure that it will engender a great discussion. 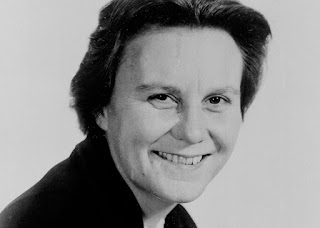 Harper Lee was born in 1926 in Monroeville, Alabama. She is the author of the acclaimed To Kill a Mockingbird and Go Set a Watchman, which became a phenomenal #1 New York Times bestseller when it was published in July 2015. Ms. Lee received the Pulitzer Prize, the Presidential Medal of Freedom, and numerous other literary awards and honors. She died on February 19, 2016. 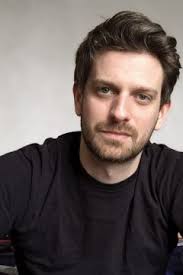 Fred Fordham was born in 1985 and grew up in north London. Before beginning work in comics and graphic novels he worked as a traditional portrait painter and muralist. His first published work in the medium appeared in France and he has since written and illustrated stories for various publications, most recently illustrating Philip Pullman's debut graphic-novel, The Adventures of John Blake: Mystery of the Ghost Ship.