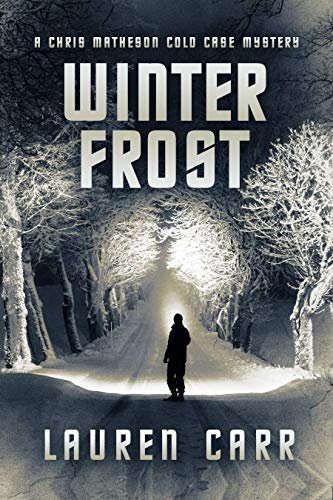 Winter Frost is the second book in the Chris Matheson Cold Case Mystery series. After reading ICE I was eager to read this second instalment.

It all started with a chance encounter in the city with Blair, his late wife.

Chris Matheson and the Geezer Squad, working under the guise of a book club, dig into the events surrounding his late wife’s supposed death halfway around the globe. A state department employee shoots himself in the back three times. A CIA operative goes missing. A woman is targeted by an international assassin three years after being declared dead in a terrorist attack overseas.

Nothing is as it seems.

In his most personal cold case, Chris fights to uncover why the state department told him that Blair, the mother of his children, had been killed when she was alive. What had she uncovered that has made her a target? Who terrified her so much that she had gone into hiding and why are they now after him?

Winter Frost is the second book in the Chris Matheson Cold Case Mystery series. After reading ICE I was eager to read this second instalment. How Lauren Carr manages to come up with such unique characters, mystery plots and twists is beyond me.

Chris Matheson, is a retired FBI agent in his forties, a widower with three daughters who has reunited with his old flame, Helen. They are about to go on a hot date when suddenly Chris sees Blair, his late wife who was supposed to be dead, killed overseas three years ago. He starts following her and, of course, this starts the non-stop action Carr is so well known for. I love that Murphy and Jessica, characters from the Thorny Rose Mystery series are in this novel as are Tristan, Nigel and Monique.

Although Carr writes fun, lighthearted fiction, I always enjoy when she adds realism to her characters. Chris is a loving father and this comes through beautifully toward the end of the book when he takes the time to have a heart to heart with one of his daughters.

Everything I've come to expect from Lauren Carr's mysteries are in this book. Lovable animal characters that add humor and comic relief, strong women who take action (Oh Doris, you are one heck of a grandma!) and corrupt government officials. And yes, we cannot forget the Geezer Squad, Carr's newest set of characters that bring a new meaning to the word retirement.

These books are addictive and I always look forward to reading the next one in the series because I now know all the set of characters from all the series. If you're looking for a fun mystery series full of action and great characters, you've got to introduce your reader self to the world of Lauren Carr.

​Lauren Carr is the international best-selling author of the Mac Faraday, Lovers in Crime, and Thorny Rose Mysteries—over twenty titles across three fast-paced mystery series filled with twists and turns!

Now, Lauren has added one more hit series to her list with the Chris Matheson Cold Case Mysteries. Set in the quaint West Virginia town of Harpers Ferry, Ice introduces Chris Matheson, a retired FBI agent, who joins forces with other law enforcement retirees to heat up those cold cases that keep them up at night.

​Lauren is a popular speaker who has made appearances at schools, youth groups, and on author panels at conventions. She lives with her husband, and three dogs on a mountain in Harpers Ferry, WV.