The lovely Sheila at Book Journey is once again hosting First Book of the Year and this is the 6th year I participate. It's a meme where we share the first book we will be reading in 2019. And it gets me all excited for another year of great reading.

So what is the First Book of the Year? It should be:

C. Really whatever you want it to – it is after all YOUR First Book Of the year. 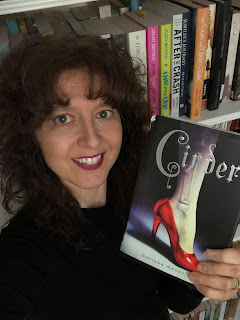 This year I've decided to read Cinder by Marissa Meyer. I've been wanting to read this book for such a long time. Ever since my daughter (and hundreds of other bloggers) have said how much they loved it.

CINDER, a gifted mechanic in New Beijing, is also a cyborg. She's reviled by her stepmother and blamed for her stepsister's sudden illness. But when her life becomes entwined with the handsome Prince Kai's, she finds herself at the centre of a violent struggle between the desires of an evil queen - and a dangerous temptation.

Cinder is caught between duty and freedom, loyalty and betrayal. Now she must uncover secrets about her mysterious past in order to protect Earth's future.

This is not the fairytale you remember. But it's one you won't forget.

My review will be up later this month.

So what is your first book of the year?