Today I wanted to share with you this press release about a series I am excitied about. I read Remember, Remember this past week and thought it was such a fun book.

As of today, all of the 2017 releases in the Sherlock & Lucy series will be available in a special box set edition (e-book & audiobook formats only) via Amazon. See for more info below.

Have any of you read any of these books?

Since Sherlock Holmes first appeared in print in Sir Arthur Conan Doyle’s 1887 novel A Study in Scarlet, the fictional detective has gone on to become one of the most beloved and iconic pop culture characters of all time, spawning thousands of stage and radio plays, television shows, films, and books.

Now, father-daughter author duo Charles Veley and Anna Elliott have introduced the world to a fresh yet faithful reimagining of Holmes with The Sherlock Holmes and Lucy James Mystery Series (http://sherlockandlucy.com/) -- praised by Publishers Weekly as a "winning" addition to the Holmesian canon that "readers will look forward to further adventures [in].”

Introducing readers to Lucy James -- an independent, modern-minded young woman who inherited her father’s intelligence and detective skills – and a Sherlock who must contend with the mysteries and challenges of being a parent, the 2017 releases in The Sherlock Holmes and Lucy James Mystery Series -- available in a special boxset edition as of ‘Cyber Monday’ (November 27, 2017)! -- include Remember, Remember, The Crown Jewel Mystery, The Jubilee Problem, and Death at the Diogenes Club.

Preceded by The Last Moriarty (2015) and The Wilhelm Conspiracy (2016) -- books #1 and #2 in the series, penned by Charles Veley -- the Ellliott-Veley collaboration on the Sherlock & Lucy series has been praised by critics as "a new way to enjoy Sherlockian mysteries" (The Santa Barbara Independent) and "a very delightful way to spend an afternoon" (History From A Woman's Perspective).

“While the Victorian era looked in many ways very different from our own – corsets! Lack of indoor plumbing! No iPhones! – there are human themes like love and family, and darker themes like crime and hate, that are still universal,” Elliott says of the Sherlock & Lucy series.

“My father, who has been a Sherlock Holmes fan since boyhood, read me Conan Doyle stories as bedtime stories throughout my childhood, and writing these books in collaboration with him has proven one of the most fun, joyful, effortlessly delightful writing experiences of my whole career,” she continues.

“I hope readers will enjoy a slightly new twist on the Sherlock Holmes character, and that they’ll grow to love Lucy and her own journey to discovering her place in Victorian London, her career as an actress, and what she wants for her own life, too.”

Charles Veley has loved Sherlock Holmes since boyhood. As a father, he read the entire canon to his then-ten-year-old daughter at evening story time. Now this very same daughter, grown up to become acclaimed historical novelist Anna Elliott (the Twilight of Avalon trilogy; The Pride & Prejudice Chronicles), has worked with him to develop critically acclaimed adventures in The Sherlock Holmes and Lucy James Mystery Series! Following the release of The Last Moriarty (2015) and The Wilhelm Conspiracy (2016) – books #1 and #2 in the Sherlock & Lucy series, penned solely by Veley – in 2017, Veley and Elliott’s collaboration has brought readers Remember, Remember, The Crown Jewel Mystery, The Jubilee Problem, and Death at the Diogenes Club.

"Fans of Holmesian stories, historical fiction, and Victorian romance will all find something to enjoy in the Sherlock Holmes & Lucy James Mystery Series." -- Critical Blast

"[Lucy James is an] independent, strong feminist young woman who is unafraid to take care of herself even in very uncomfortable situations. This fact alone sets [The Sherlock & Lucy series] apart from most Regency historicals or other Sherlock Holmes mysteries. Women are generally damsels in distress, but not Lucy!" -- Tynga's Reviews

"It might be difficult to imagine the original Holmes even having an offspring -- much less one he accepts as an investigating partner. Still, the authors make it seem plausible, and for readers who are not purists but rather pleased to see a hint of warmth coming from Holmes, [the Sherlock & Lucy series] is a new way to enjoy Sherlockian mysteries." -- The Santa Barbara Independent

"I absolutely loved Remember, Remember and think it's the perfect book for Sherlock Holmes fans, as well as mystery lovers. I cannot praise this book and its authors enough for this well written and imaginative story." - The Nerdy Girl Express

"Reading this novel was a very delightful way to spend an afternoon. Remember, Remember will not only appeal to fans of Sherlock Holmes, but also to those who love The Secret Life Anna Blanc, The Beekeeper's Apprentice, and A Curious Beginning. - History from a Woman's Perspective

"Elliot's writing style is solid and easy to become absorbed in. She gives Lucy a strong narrative voice, which caused the plot to both flow well and pack a punch. Her world building of 1897 London is vivid and skilled, making it a very high point of the novel. She unravels the mystery at a steady pace, showing her talent for creating a storyline that hooks her readers and keeps them wanting more. [...] A very fun story, and an inventive take on some very timeless classics." - The Quirky Book Nerd

The Sherlock Holmes & Lucy James Mystery Series by Charles Veley and Anna Elliott to date includes The Last Moriarty (2015) and The Wilhelm Conspiracy (2016), and the 2017 releases Remember, Remember, The Crown Jewel Mystery, The Jubilee Problem, and Death at the Diogenes Club. As of November 27th, all of the 2017 releases in the Sherlock & Lucy series will be available in a special box set edition (e-book & audiobook formats only) via Amazon. All titles are available for purchase in paperback, e-book, and audiobook formats via Amazon and Audible. 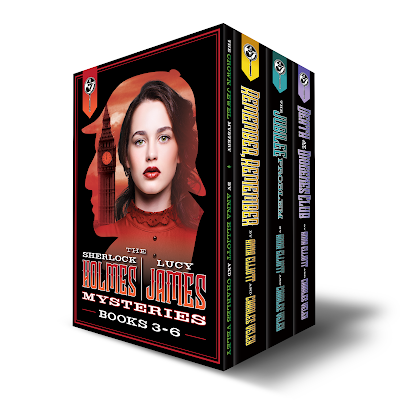