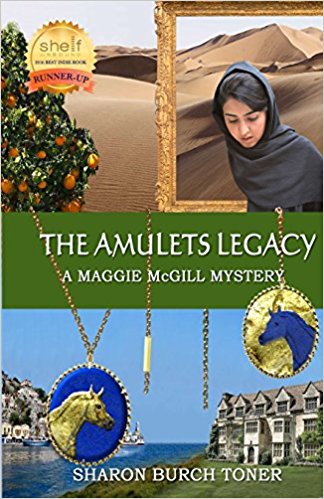 The Amulets Legacy by award-winning author, Sharon Burch Toner, begins with a young orphaned Bedouin girl in the nineteenth century. It moves to the present day Middle East where mother and daughter, Maggie and Allie McGill, dare everything to rescue a pair Syrian refugees who are pursued first by members of Isis and then by the Turkish police. Fleeing from these two dangers, they make their way across Turkey to a Greek island. But the danger continues to chase them, even to the British Isles.


I feel honoured to have read and reviewed all of the Maggie McGill mysteries. And this latest novel is no exception. Once again, the author has succeeded in writing a story that is both exciting and relevant to the world in which we live. The plight of the Syrian refugees is compassionately told.

The prologue begins in the ancient mists of time that is the 5th century BC, continuing to 2017. The story revolves around two lapis and gold horse-head pendants (amulets) and is told in two parts. The first, covering the years 1818 in the Middle East to 1852 England, is interesting if somewhat slow moving. The second part, involving the present day is immediately suspenseful, fast-paced, reflecting current events in Syria. The author has creatively threaded the story of the amulets from the past to the refugee crisis of the present, to the wanton destruction of invaluable museum artifacts. Bravo!

The descriptions of the desert as well as the English countryside are captivating. The author has an elegance of style in her writing that I enjoy. "Each of us is a play unto himself with a long cast of characters buried inside."

The author lovingly maintains the personalities of both Maggie and her beloved daughter, Allie that we have come to know and love in the past 8 stories. Ever-resourceful, strong and independent, the two women find themselves in situations that would test the courage of any modern-day sleuth. And they do it in a believable, thoroughly modern fashion.

And, as usual, the author succeeds in telling a wonderful story without resorting to sex, sexual innuendo or expletives of any kind.

I wholeheartedly recommend this book.


Sandra Olshaski's disclaimer: Thanks to the author for sending me this book for review. I was not compensated in any other way, nor told how to rate this book. 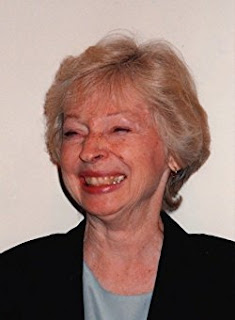 Sharon Burch Toner is the author of the Maggie McGill Mysteries, featuring a mother and daughter sleuth team. Her Irish grandmother gave her a lifelong appreciation for a story well-told. She pursued a career as a psychotherapist for nearly twenty years before she turned to writing as her ideal occupation. She lives on the Olympic Peninsula.

Visit Sharon Burch Toner's Amazon page and her Website to learn more about her books.
﻿