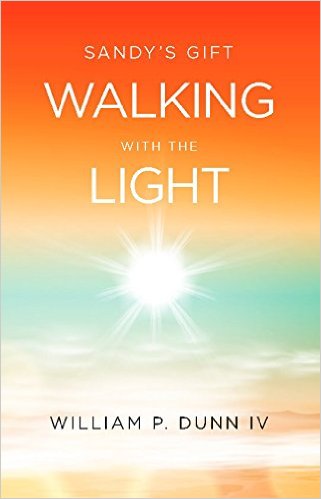 Today I am featuring a memoir that brings to light a family's struggle with a mother and loving wife with mental illness. By sharing his story, the author hopes that people will have a better understanding of the ravages of mental illness and know how to cope with them better.

More than 15 million adults and their immediate families in America today must cope with a patient suffering from severe mental illness. In too many cases, these families cannot or do not know how to get help for their loved ones.

SANDY’S GIFT: WALKING WITH THE LIGHT (Cedar Forge, 2017, softcover) by William P. Dunn IV is an intimate and shocking true story that tells of the tragic plight of Sandra Dunn, a mother and loving wife whose life takes a tragic turn when she suddenly falls victim to severe mental illness; how the healthcare profession and the law prevented her from getting the treatment she needed; how it destroyed her family and nearly got them killed. By sharing his story, Dunn hopes that people will have a better understanding of the ravages of mental illness and know how to cope with them better.

LCR: Welcome to Library of Clean Reads. Can you describe your book in 20 words or less?

WPD: One never combines in writing: love, tragedy, religion & politics in one book. All I did was tell the truth! (That’s exactly 20 words of my wisdom)

LCR: Why did you decide to write Sandy’s Gift?

I would say a number of factors. At first I was angry at the world and thought an injustice had occurred but did not know what actually went wrong as there was no way to find any answers. Once I knew what had occurred I wanted those whom I felt had failed the “public Dis-servants” of New Jersey held accountable. What did I find? Public employees are held to no standard. They work in the land of Peter Pan as it is called “never, never land” in the book and movie. This is the same land in which the so-called public servant in America works because they know they can “never ever get fired”. I learned this the hard way, unfortunately.

Due to the spiritual occurrences after Sandy’s passing I have since come to understand now why God above brought our lives together, took her in the manner in which she passed. Somehow I believe that our lives are somewhat preordained and that choices along the path of life determine where our lives wind up. I guess I have come to peace now, and as Debbie McGee, who reads this prior to its official launch, said: Bill you are the voice for all those families. So I now would have to say writing this has brought closure for me I guess, and I will use the following quote from page 251:

Many will wonder why I decided to write this biography of my life with my late wife Sandy. My answer is quite simple. Sandy would want her story told. She was a kind and compassionate gal, who did not have a mean bone in her body. She was giver and not a taker. I am a better man because she chose to share her life with me and I learned also to be a better person and a giver as well. If Sandy were alive today, she would say, “Write this, Bill and if just one family is spared from the hardships and grief that both you and the girls had to endure then my passing would not be in vain “and so this is my reason to do so.

I guess I wrote this for all of the others who remain quiet while looking for medical help and answers. Maybe Debbie McGee is right and perhaps “I am that voice”.

LCR: What was the most difficult thing about writing this memoir?

WPD: Definitely the first 8 chapters, I cried as I wrote them starting on 11/30/2010 and then put it down for a breather, a few months later. I’m an Irishman with a gift to gab and my thoughts come faster than I can write them down and had a bit of corrections to make. Also the second part of the book as I had to cross reference all dates to be 100% accurate against court documents in 2014.

LCR: What was the most surprising thing about writing this memoir?

WPD: Well considering my degree is a dual degree in Economics & Business Admin. I would say the positive feedback from all whom have read it prior to publication date. Maybe I can write? That will be determined by a higher power.

LCR: What is your best advice to families who are dealing with a family member who has a mental illness?

WPD: Trust yourself and your own instincts when dealing with a family member with a mental health illness. Unless one has actually physically lived with a family member who is suffering, they truly cannot have any idea nor grasp what it is like to live through it. Approximately 6% of 270 million adults or about 15 million are walking in America with a severe form of mental illness. In contrast, approximately 257,000 women will be diagnosed with breast cancer in 2017. As a nation we need to address the 15 million because their families need our support. Myself and my daughters are victims of our country's neglect or society’s ignorance.

LCR: Thank you very much for sharing those personal thoughts with us.

William P. Dunn IV worked on Wall Street in the U.S. Government bond market where he worked his way up from the back office to the trading desks. After twenty years on Wall Street, he became a financial advisor in northern New Jersey. He continues to work as an investment advisor. He is a graduate of Thiel College where he earned a dual degree in Economics and Business Administration. Today he lives in Ft. Lauderdale, Florida and is a proud grandfather.