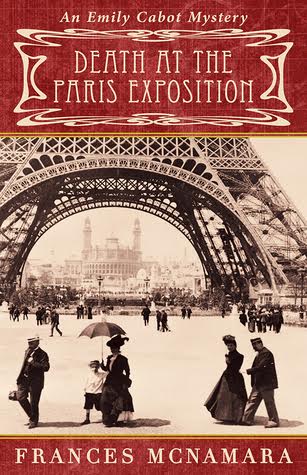 Today I'm featuring Frances McNamara's latest novel in the Emily Cabot Mystery. I love historical fiction, especially those with strong female protagonists, and was happy to have discovered this author although I have yet to read her novels. Join me in learning more about the Emily Cabot mystery series by reading my interview with Frances McNamara and by entering the giveaway!

Amateur sleuth Emily Cabot’s journey once again takes her to a world’s fair—the Paris Exposition of 1900. Chicago socialite Bertha Palmer is named the only female U. S. commissioner to the Exposition and enlists Emily’s services as her secretary. Their visit to the House of Worth for the fitting of a couture gown is interrupted by the theft of Mrs. Palmer’s famous pearl necklace. Before that crime can be solved, several young women meet untimely deaths and a member of the Palmer’s inner circle is accused of the crimes.

As Emily races to clear the family name she encounters jealous society ladies, American heiresses seeking titled European husbands, and more luscious gowns and priceless jewels. Along the way, she takes refuge from the tumult at the country estate of Impressionist painter Mary Cassatt. In between her work and sleuthing, she is able to share the Art Nouveau delights of the Exposition, and the enduring pleasures of the City of Light, with her husband and their children.

LCR: Welcome to Library of Clean Reads and congratulations of writing your 6th novel in the Emily Cabot Mystery series! Can you describe this latest release in 20 words or less?

LCR: Why did you choose the Paris Exposition in 1900 as your setting?

FM: I visited Paris a few years ago and realized that, like in Chicago, you can feel the imprint of the people of the late nineteenth century, the “Gilded Age,” on the city. A large part of Paris was torn down and rebuilt by Baron Haussmann in the nineteenth century and I could picture my character, Emily Cabot, on the Champs Elysees, or visiting the Grand Palais. When I discovered that the famous Chicago society woman Bertha Palmer was the only woman commissioner in the U.S. delegation to the 1900 Paris Exposition I decided to have that event be the backdrop for the story.

A traveling art exhibition on fashion and the Impressionists at the Art Institute of Chicago also inspired me. I was excited to research and include information about the dress designs of the House of Worth and the American Impressionist painter Mary Cassatt, who I’ve always admired. Finally, it occurred to me that since I’d begun the series with Death at the Fair (set at the Columbian Exposition of 1893) I could put the 1900 Paris Exposition in the middle and then aim to end the series at the Century of Progress world’s fair in Chicago in 1933/4. That would give me something to aim for in the overall arc of the series. Also, I love Paris! It is a great city, just as Chicago is.

LCR: I personally appreciate books with strong and intelligent female lead characters in a historical setting. What are the challenges of writing such a character at a time when females were not even allowed to vote?

FM: That’s what really intrigues me about the turn-of-the-century time period. Women were hampered by society and laws but, despite that fact, they began to go out and accomplish amazing things. I dislike portrayals of wimpy women of the time who are victimized by society. I knew there were other women out there taking a stand and doing things and, personally, I’m grateful to them. So, the fun of writing this series is researching real women who did real things and the bringing them back into the light and giving them well-deserved recognition.

Bertha Palmer is an example of a woman who, in our time, might run for office, as Hillary Clinton has. But in her time, she was able to use her money and social influence to make things happen in her own way. Mary Cassatt is another wonderful example of a significant woman of the time. She came from a wealthy family but turned her back on the expectations of society and supported herself as an artist. There’s a lot to admire about women who bucked the system, or used it to accomplish goals, despite the limitations placed upon them.

LCR: What or who has been an inspiration for your novels?

FM: The city of Chicago itself, and some of the real places you can still visit—like Hull House, the town of Pullman, and even the University of Chicago campus—have all been inspirational to me. My protagonist, Emily Cabot, is roughly based on some women of the time who worked for progressive social change. Forgotten heroes and heroines that I find when I do research provide inspiration— people like Ida B. Wells, Jane Addams, Florence Kelley, Wang Chin Foo, and many others who I hadn’t previously known existed. They’re worth remembering because many things that are good about our present day, and that we take for granted, are things that they had to struggle for.

FM: Actually, I would not like to travel back and have to live at an earlier time. I guess I think we’ve made progress and if I lived at an earlier time my life would be less comfortable and more restricted. I wouldn’t mind going back for a short visit, and certainly Paris during the 1900 Exposition would be fun. I got to do that a bit by finding lots of pictures that I put on Pinterest: https://www.pinterest.com/fdmcnama/death-at-the-paris-exposition/

And even finding some videos online from the Exposition, like this one:

LCR: What would you like my readers to remember about you?

FM: If they like historical mysteries—especially ones set around the turn of the century—which combine real historical figures with a strong female protagonist, they’ll really enjoy the Emily Cabot Mysteries. Fans of the Laurie R. King and Rhys Bowen mysteries series will find much to like in my books. They can found out more about all of my books at http://alliumpress.com/authors/frances-mcnamara/ and visit my website, https://francesmcnamara.com/.

LCR: What are you working on next?

FM: I’m working on an Emily Cabot mystery set in Chicago in 1909. At that time there were several film studios producing silent movies in Chicago, before they all moved out to Hollywood. Emily and her family are about to leave for a summer at Woods Hole on Cape Cod when she gets a call from her reporter brother, Alden Cabot. There’s been a murder at the Selig Polyscope studios on the north side of Chicago and he needs her help investigating it. There she discovers the astonishing dream factory where moving pictures are being created by a cast of strange and interesting characters.

LCR: Thank you for chatting with me!

Frances McNamara grew up in Boston, where her father served as Police Commissioner for ten years. She has degrees from Mount Holyoke and Simmons Colleges, and recently retired from the University of Chicago. She now divides her time between Boston and Cape Cod. She is the author of five other titles in the Emily Cabot Mysteries series, which is set in the 1890s and takes place primarily in Chicago: Death at the Fair, Death at Hull House, Death at Pullman, Death at Woods Hole, and Death at Chinatown. Visit her website Follow her on Facebook Sign up to receive her newsletter Follow Allium Press of Chicago on Twitter | on Facebook

You can enter the global giveaway here or on any other book blogs participating in this tour. Be sure to follow each participant on Twitter/Facebook, they are listed in the entry form below.

Visit each blogger on the tour: tweeting about the giveaway everyday of the Tour will give you 5 extra entries each time! [just follow the directions on the entry-form]

Global giveaway open to US residents: 1 winner will receive a copy of this book

CLICK ON THE BANNER TO READ REVIEWS, INTERVIEW, GUEST-POST AND AN EXCERPT