Posted by Laura at Library of Clean Reads on June 28, 2016 in Books in a Series Dystopian Lance Erlick Regina Shen series YA Book Reviews | Comments : 1 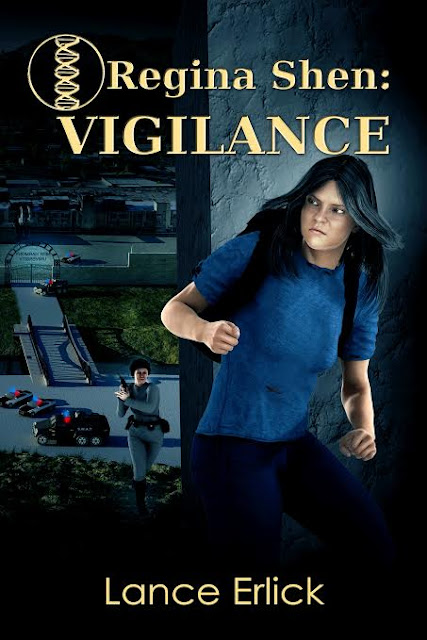 What makes this series so good are the well-developed characters and the world-building. This continues in the second book as we get deeper into the story.

Book Details:
Book Title:  Regina Shen:  Vigilance (Book 2)
Category:  YA fiction, 236 pages
Genre:  Sci-fi / adventure / dystopian
Publisher:  Finlee Augare Books
Release date:  April 2015
Content Rating:  PG  (no bad language or sex, some violence)
​
Book Description:
After two years of training, outcast Regina Shen prepares to jump the barrier wall into the World Federation to hunt for her sister, but nothing goes according to plan. The Federation condemns Regina and her family to live on the seaward side of barrier walls.
For two years she avoided capture. Now the Federation is desperate to exploit her unique DNA in order to prevent human extinction. She would rather die than help the people who kidnapped her sister. The Federation’s notorious Department of Antiquities, under the command of Chief Inspector Joanne Demarco, polices barrier walls, destroys knowledge from the past, and pursues Regina for her genome. Now Demarco has a ruthless rival who aims to capture Regina as a means to overthrow Demarco.
Regina has survived by her wits on swampy islands and salvage from sunken cities, including illegal print books not available in the Federation. Her photographic (eidetic) memory, access to these books, and an amazing teacher just may help her reach the university town in the Federation where they’re holding her sister. Pursued by Antiquities, Regina jumps the wall into the Federation.
While making new friends and enemies, she must use her wits to avoid letting either of two rival inspectors capture her. Can she rescue her sister from an obvious trap?
Buy the book:   Amazon   Barnes & Noble


Vigilance is the second book in the Regina Shen series and I found it just as thrilling as the first book. This series must be read in order and are not stand-alone novels, so I strongly suggest you begin with the first book. You can read my review of Resilience, Book 1 in the Regina Shen series, a book I found to be a pleasant surprise and a true gem among dystopian indie books.

What makes this series so good are the well-developed characters and the world-building. This continues in the second book as we get deeper into the story. Regina, who lives in the swampy islands outside The Wall with the outcasts of their only-female society has been training for the last two years to manage the huge feat of crossing this impossible barrier wall and then infiltrating the University as a student.

She manages it but her intelligence and free-thinking gets her into trouble. It also makes her see just how much The World Federation bullies their society into submission and conformity, and Regina goes against the grain. She discovers other free-thinkers and manages to find her sister, evade capture, and decide that she must use her skills and life to change things.

Once again, Regina uses her wits and this time, unbeknown to her, she is up against two rivals who are using her as a pawn in their own game for power and greed. New characters are introduced and Regina goes through many trials. She experiences tragedy, makes new friends and discovers her worth in view of what she can do to bring about possible change.

Because the world in this novel is an all female society there were instances where two of the characters showed a love attachment to another female. It was subtle however. The author has not portrayed the society as a lesbian one so I have been comfortable up to now reading this series and hope that this aspect does not become a major theme in the series.

I look forward to digging into Defiance Book 3 in the series to see how Regina keeps growing as a character and as a leader for change in her broken society. If you like well-written dystopian novels don't miss this series. It will not disappoint!