At the Sharp End of Lightning by N.R. Bates (Review & Giveaway) 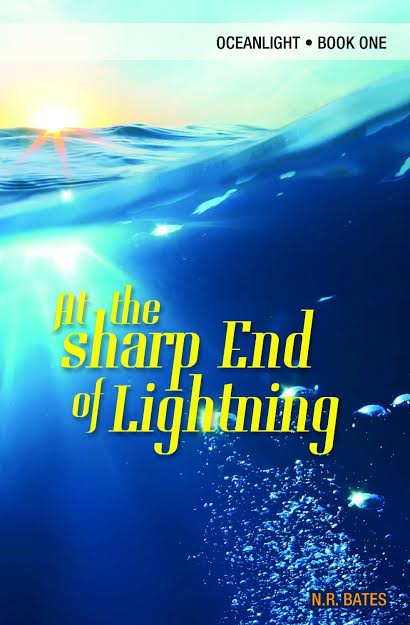 Three fantastical realms where each character finds himself on a journey, both adventurous and dangerous. N.R. Bates' ability to create depth in characters and their worlds is outstanding in this first book of the Oceanlight series.

Trade paperback, 4444 pages
Content Rating: PG-13 (There is only one f-word, but no other profanities, sex, or violence)

The interwoven fantastical tale of family, of loss and sacrifice, of unexpected gifts and coping with disability and new abilities set against the backdrop of climate change occurring across parallel worlds. In Oceanlight, Yalara Narika, a winged Sea Sprite, searches for her lover over immense seas only to find catastrophe and realization that her world is in turmoil.

Meanwhile in the safe suburban normality of North Wales, Einion Morgan Alban, a restless youth afflicted by a disease of the blood, is nearly murdered by a man in a white suit. Yalara and Einion must discover the causes of their near-deaths and their as yet unrevealed connections as they both face upheaval to their lives and their worlds.

At the Sharp End of Lightning is a fantasy / sci-fi novel that totally immerses the reader into its different worlds. It's not a novel with a lot of fast action but rather a first book in an epic series that builds its characters and its parallel worlds with such clarity and detail that it becomes a testament to this author's vast imagination. A glossary at the end of the book is very useful to the reader to learn the various terms connected to these imaginary worlds.

In Oceanlight, we follow Yalara, a winged Sea Sprite who is next in line to become the leader of her Seanest. She is wise and perceptive, flying as a Rider on her petrel bird as she scans the ocean for her lover but instead ends up finding her neighbouring sea village devastated by what seems to be a natural catastrophe. In Forestlight, there is Helia, a winged forest Sprite and former outcast who is given a dangerous assignment and who passes through the Thinness into the human realm on a mission. She has suffered great loss and she has a secret that is connected to the human world.

Finally, in 1977 North Wales, we meet Einion, an older teen haemophiliac who has suffered much because of his disability but whose resilient and calm personality is a result of it. He also discovers the Thinness and passes through worlds, and at one point he actually time travels. Being a fan of time travel stories, I loved this part of the story! The mystery surrounding his connection to the other realms only increases.

I loved both the fantasy worlds and the modern suburban world of England. In some ways the dual worlds of fantasy and reality reminded me of the move Avatar. The Sprites' connection to nature was strong just like the Na'vi people in Avatar, but that's where the similarities end. The author alternates between these three worlds through each chapter. Both settings are so vivid, immersive and so different that I felt like I was reading two different books!

The author builds slow suspense throughout the novel and as a reader I was always looking for clues to the connection between all three worlds. The ending left we wanting more because it did not resolve any of the plot threads. In other words, this book is not a stand-alone novel. It builds the worlds and the characters and the plot but there is no resolution. That is to come in Book Two. At least I'm hoping it does.

I am now so into this story, that I must read the second book. The author's ability to create depth in characters and their worlds is outstanding, making me yearn to read the next instalment. His experience as an oceanographer and scientist render the fantasy worlds believable and his characters so likeable, one cannot help but get attached to them. Highly recommended for all those who love intelligent fantasy novels with dual worlds. 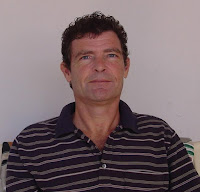 NR Bates was born in London, grew up in Wales, and lived in Canada and Bermuda. He shares his life with his wife and his house with seven cats, one dog and the subtropical wildlife of lizards, wolf spiders and ant colonies that seek out a better life indoors.

He is an oceanographer and scientist, and has published more than one hundred and thirty scientific papers on ocean chemistry, climate change and ocean acidification. He is a Senior Scientist at the Bermuda Institute of Ocean Sciences and Professor of Ocean Biogeochemistry at the University of Southampton, UK.

​His novels focus on epic fantasy and magic realism, and inspired by his deep love of the ocean and environmental sciences. He has also recently published a small book of short-stories set in Paris, entitled “The Fall of Icarus (The Elevator, The Fall of Icarus, and The Girl)”.