The Free Market Existentialist: Capitalism Without Consumerism by William Irwin 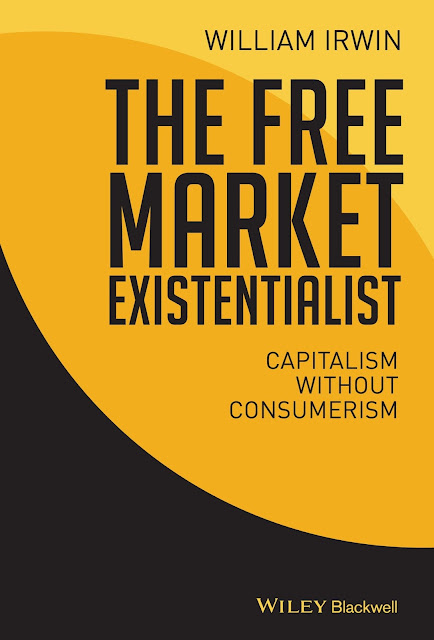 It's not often we review books on philosophy and economics, but this one grabbed our interest. Here is a description of the book, followed by my review.

THE FREE MARKET EXISTENTIALIST is unique because it is the first existentialist defense of libertarianism, bringing together two approaches that traditionally have been viewed as incompatible. Existentialists emphasize the importance of subjectively choosing one’s values and determining the meaning of one’s life. Libertarians champion strong property rights and the individual’s prerogative to live in any way that does not cause harm to others. Ultimately, individualism is the link between existentialism and libertarianism, producing a philosophy that values freedom and a corresponding responsibility.

· Why existentialism is the ideal balancing agent, the perfect partner for capitalism, allowing us to reap the benefits of a free market while encouraging us to resist crass consumerism.

· Why a free market existentialist must take the responsibility to choose work that he or she finds meaningful rather than aimlessly drifting into work that is alienating.

· Why the income tax is tantamount to theft and should be repealed. Instead, an “equal tax” policy is a better alternative, wherein the state is conceived as a club in which members pay equal dues for equal benefits.

· How evolutionary theory fits with existentialism to help us confront the “final delusion” of objective values.

· How love and law can largely replace the motivating role of conventional morality.

Not ending a debate but aiming to start one, Irwin proposes free market existentialism as a new competitor in the marketplace of ideas.

In clear and accessible prose, The Free Market Existentialist begins an important conversation for the 21st century that will be of interest to scholars, students, and the general public alike.

In proposing such an endeavor, he takes the reader through the birth of existentialism philosophy from those who are recognized today as the founders of existentialism and legitimises some of their views and not others to better suit present day readers. For example, Sartre's earlier views compared to his later ones.

As can be expected, William Irwin hopes his audience will enjoy the prospective he offers them and perhaps the debates that may follow. In this regard, I think he may well succeed.

The book subject matter is not for your average reader. Although the book has a good flow, there are some parts that are truly difficult reading as the reader tries to unpack the terms and arguments being made. However, the chapters dealing with the practical aspects of existentialism are easier to follow and they allow for the reader to debate the author's arguments.

My final comment is that I have and will continue to enjoy debating with myself and others the merits of the arguments introduced, but the book didn't change my view on the position taken by existentialism.

Disclosure by Fil Piccolo: Thanks to the author for sending me this book for review. I was not told how to rate or review this product.

William Irwin is Herve A. LeBlanc Distinguished Service Professor and Chair of Philosophy at King’s College in Pennsylvania. He is the author of Intentionalist Interpretation and scholarly articles on Sartre, Nietzsche, and Heidegger. Irwin originated the philosophy and popular culture genre of books with Seinfeld and Philosophy in 1999 and is currently the General Editor of The Blackwell Philosophy and Pop Culture series.