Out from the Underworld by Heather Siegel (Review and Giveaway!) 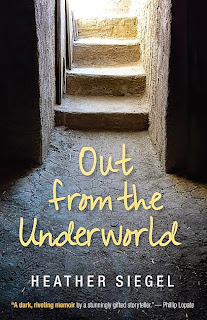 This is gripping memoir written in a beautiful, lyrical style, without ever becoming overly sentimental. The reader can immediately identify with the complex emotions and relationships we can have within the family.

In the prologue, Heather Siegal describes a visit to her father, who is still living in ‘the underworld’ of the title—the dark and dank basement of his parents’ house. One of the most poignant and telling passages in the book is found on page 2, speaking of her young daughter, “She smiles four teeth. She loves her Grandpa as much as I do, even if she can count on one spider hand the number of times she’s seen him.”


The basement apartment looms large in the story. Its dark and cramped conditions seem to reflect Siegal’s father’s fearful and debased state of mind. He chooses to retreat to this gloomy underworld, despite being able to aspire to better. It is the catalyst that drives his wife away, a prison of darkness for his children, and proves to be a fortress that is an illusion of security for him.

I found this book to be moving because it is neither sensationalized nor preachy. This little girl grew up unprotected. With a little luck and a lot of pulling herself up by her bootstraps, she came to have success in business, became a loving mother and managed to salvage a certain relationship with her father. The different points of view from the siblings and the effect that they had on each other were fascinating elements in the story. The content is a bit disturbing for the very sensitive reader, but does end on a positive (yet realistic) note, which can make all the difference. Heather Siegel holds an MFA in nonfiction writing from The New School. Her work has appeared on Salon.com and in The Mother Magazine and Author Magazine, as well as in various trade publications. She was a finalist for the 2010 Pacific Northwest Writers Association Literary Award in Nonfiction Writing, the 2011 San Francisco Writers Conference Nonfiction Writing Award, the Carolina Wren Press 2012 Doris Bakwin Award and the 2012 Kore Press First Book Award. A multi-creative person with interests in the arts, nutrition, health and beauty, she has founded several independent businesses, including a coffeehouse, a café, an organic juice bar and a natural beauty bar. She currently lives with her husband, Jon, and daughter, Julia, in the woods of Long Island in a house filled with light.