The Girls of Piazza d'Amore by Connie Guzzo-McParland 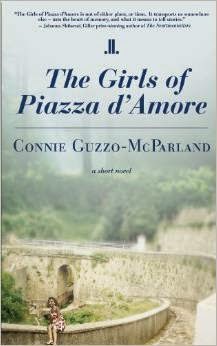 The story takes place in a fictional village in Calabria, Southern Italy, replete with its history, traditions, gossip, local characters, and family dynamics.  It is told through the eyes of a young girl, Caterina, who observes the lives of her three friends, including their loves and losses, as she accompanies them on their daily walks to the water fountain.  At the same time, it’s the story of the whole village as everyone is connected in one way or another.

The reader learns a lot about village life in Italy in a bygone era, full of hardships, daily struggles, and the eventual painful separations as family members, and in some cases, whole families, left Italy in search of a better life.


The author makes vivid use of language, both English and Italian. I learned a lot of new Italian words!

I grew up in a city in Northern Ontario that had many Italian immigrants, often hearing from them that they would eventually return to their paese (homeland), the “old country”, which they remembered so fondly. So I was pleased to have the opportunity to review this book that is so full of warmth and nostalgia and to get a “feel” of what life was like in 1950’s Italy.

This book will appeal, I think, to Italians, second-generation Italians, wanna-be Italians and people in general who appreciate history, family, and the courage to leave everything that they know and love to reach out for life in a new country. I salute those hard-working immigrants who made Canada their home, bringing with them a strong work ethic, thereby contributing so much to life in Canada.

About the author:
Born in Italy, raised in Montreal, Connie Guzzo-McParland has enjoyed an eclectic mix of life experiences. She majored in Italian literature at Concordia University, then pursued a teaching and business career before graduating from the Creative Writing Master’s program at Concordia University where she received the 2006-2007 David McKeen Award for Creative Writing for her thesis, the novel Girotondo. An excerpt from this novel, translated into Italian, won second prize at the Premio Letterario Cosseria in Italy. Since 2010 she has been co-director and President of Guernica Editions.

Disclosure: Thanks to Laura Fabiani from Italy Book Tours for sending me this book for review. I was not compensated in any other way, nor told how to rate or review this product.