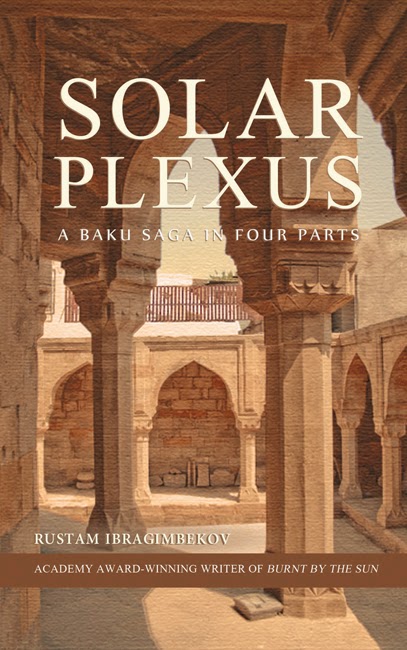 Subtle and profound, Solar Plexus is a quietly fascinating novel. Four characters act as narrators, each with a distinct perspective and unique voice. Their point of convergence is a courtyard of a residence in the city of Baku, Azerbaijan. There is a diagram of the courtyard, as well as a list of characters at the beginning, which was invaluable to me as I made my way through the book.

While the reader is obliged to re-orient himself from time to time with regard to chronology and who belongs to which generation, the author (Rustam Ibragimbekov) is highly skilled at painting a word picture. Consequently, the same experience as described from different points of view is neither confusing nor over-explained.

Solar Plexus does not recount recent Soviet/Azerbaijani history directly. It provides a small taste, on a day-to-day level, of the effects of greater historical events on industry, education, the arts, family and morals. What are the repercussions in your life when your grandfather was a counter-revolutionary? What problems do you face at work and in university, due to the changing policies of government? What sort of approach do you take to your literary career in that context at the end of the 20th century? It was enjoyable to contemplate the similarities and differences as compared to Western society.

This novel is contemplative, not action-driven. It is best enjoyed when you have some time to ruminate, to immerse yourself in the characters’ lives. It has an intriguing ‘non-Western’ flavour, stimulating the imagination and engaging the intellect and emotions (as opposed to detailed storytelling). In particular, I was completely engrossed in the moral dilemma of the fourth section.

The letter from the publisher (Glagoslav Publications) states that, “We want to show the beauty and depth of the Slavic region to everyone looking to expand their horizon and learn something new about different cultures, different people, and we believe that with this book we have managed to do just that.” Yes, I would have to agree that they have managed to do just that.

Disclosure: Thanks to the author and Glagoslav Publications for sending me this book for review. I was not compensated in any other way, nor told how to rate or review this product.