The Curiosity by Stephan P. Kiernan 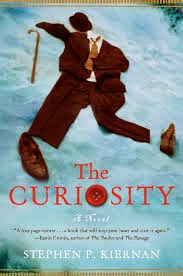 When I read this last month I was going through a reading slump, picking up one book after another and not really loving anything I read. But this book changed that. I was intrigued right from the start.

Kate Philo and her exploration team find a man frozen in the arctic ice. He has been frozen for over a hundred years since he drowned in 1906. The question is, can they revive him? Is it possible when it's never been done before? If you are somewhat fascinated by the topic of cryogenics like I am, you will want to read this book.

So many ethical questions are brought to the fore as greedy Carthage, Kate's boss, exploits this scientific breakthrough when Jeremiah Rice, a former judge, is brought to life from his frozen state. The media goes wild and religious fanatics protest. Kate and Jeremiah grow closer as they are thrown together by circumstance, but Jeremiah's clock is ticking, and Kate must decide how to deal with her boss, the media and the her love for Jeremiah.

Kiernan builds an interesting plot. It does have some holes in it and the ending was not satisfactory for me, but I loved the journey of this book with its foreshadowing elements, ethical questions and seeing the world through the eyes of a man from a former century. Jeremiah, of course was the most interesting character of the whole cast, and a diverse and interesting cast it was, made up of some well-developed characters with all kinds of motives and traits. For me the characters were a good representation of the different people in the world and their behaviors.

The story is told from the point-of-view of various characters. Kiernan skillfully switches from one to the other, and I was impressed by how he could get us into the mind of the lecherous journalist Daniel to the old-world thinking of Jeremiah to the modern woman Kate. Daniel is crude and his dialogue was laced with profanity, but somehow part of me was still able to sympathize with him because of his childhood losses. Whereas Jeremiah is fascinated by the new world he wakes up to, while mourning the one he left. I love this observation from him:

Drivers, pedestrians, shopkeepers, professionals, all exercised the lower end of their vocabulary without reserve or apology. Had no one told them that coarseness lacks dignity? p. 214

I loved this book, even though, some things were left unanswered and I questioned some of the things the characters did. There were so many other things that made up for that, in my opinion. If you're looking for a fairytale ending, you won't find it in this book, but if you're looking for a thought-provoking book that explores human nature, I highly recommend you pick up this book.

Note: This book is rated P = Profanity (a lot of f-bombs, mainly by one sleezy character and religious expletives)