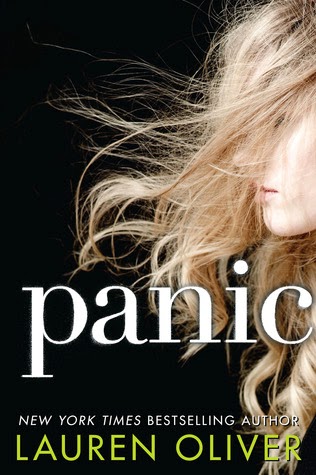 
I didn’t know quite what to expect from Panic, but I was super excited to read it since I liked Delirium so much. Panic is not a dystopian novel, however, it’s contemporary YA fiction.

Heather and Dodge live in Carp, a poor town of twelve thousand people in the middle of nowhere. Every summer, graduating seniors play Panic, a legendary game where the participants have to do daring, dangerous and life-threatening things to try to win the jackpot. This year, the jackpot happens to contain $67000. Panic is a game that tests a person’s courage and challenges him to face his worst fears.

Heather and Dodge are playing for different reasons. Initially for Heather, it’s to prove to her ex-boyfriend that she is a somebody worth loving. But when her drug-addicted mother mistreats her younger sister Lily, Heather is determined to win so she can make a better life for herself and Lily. For Dodge it’s about getting revenge for his sister who was left a paraplegic the year she played. Both Heather, Dodge and their two friends Bishop and Nat will be changed by the game.

When I first started reading Panic, I wasn’t really invested in the characters. I didn’t particularly like any of the characters either, but as I continued reading I began to feel their despair and to understand what would make them risk their lives to play Panic. The town they lived in, parents who were emotionally unavailable and their low economic situation was depressing. I wanted to shake these kids for doing stupid things but then again I could see why they did it.

About half-way through the book I was totally invested. Some of it was predictable, but I liked it anyway. Heather learned a lot about herself. She learned she was brave and lovable, and that only when she learned to love herself first, she was more confident and strong. The only reservations I have about the book’s message was that even after Heather learned all this she would still risk playing Panic again in the future. I could understand why she did it the first time but why do it again? I don’t think teens need the message that they should do stupid life-threatening things to get out of a difficult situation, especially when some don’t play by the rules and would kill to win.

Overall, this was an interesting book as it shows the way desperate teens will behave when the payoff is high. It also explores friendships, the sad result of parental neglect and how overcoming one’s fears can transform one’s life.

Note: This book is rated P = profanity. It contains f-words and crude language and underage drinking. It also contains a scene where parents are intoxicated on drugs and alcohol.

Buy the book on Amazon.ca and Chapters Indigo.