Affair in Athens by Matina Nicholas 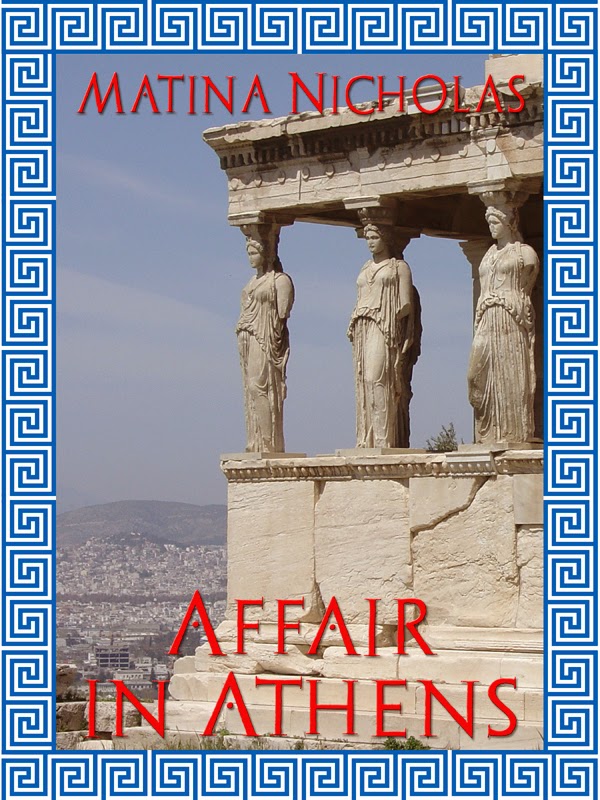 Beautiful, educated, Greek-American Athena travels to Greece to research the story of her grandfather’s past. As a Greek Orthodox priest he heroically saved Jews in Greece during World War II. While there, she discovers family members that she didn't know existed. She soon meets rich, handsome, masterful, kind, Greek-American Luke who dazzles her and seems to offer a fabulous future. Throw in a band of gypsies, a kidnapping and you have all the elements of a fast-paced story of international intrigue and romance.

I learned a few interesting facts about Greece in this book, apart from the obvious cultural heritage. I wasn't aware, for example, that there has been a Jewish population in Salonika since 140 B.C. nor those Nazi forces had occupied Greece and met such strong resistance. Who could have imagined the swastika flying from the Acropolis, that symbol of civilization? Thousands of Greeks died in direct combat, concentration camps or of starvation during World War II.

The book is very readable with its short 2-page chapters and quick-moving pace. The author captures the passion, love of family and love of life enjoyed by Greeks as they gather to enjoy delicious foods together. Descriptions of the country are inviting, from the red bougainvillea flowers to the tiny enclave of Plaka, the heart of ancient Athens, to the beautiful seaside villages that Athena visits with Luke, to the scent of lemon blossoms.

Don’t miss the recipes for delicious Greek food that are provided.

I usually try to identify how the title fits into a story. There is the obvious one, of course. But as Athena herself describes it, “she’d had an affair in Athens all right – an affair with history, her heritage, happiness and sadness.” And that pretty much sums up the book.

Disclosure: Thanks to Rosa Sophia from Oaklight Publishing for sending me this book for review. I was not compensated in any other way, nor told how to rate or review this product.